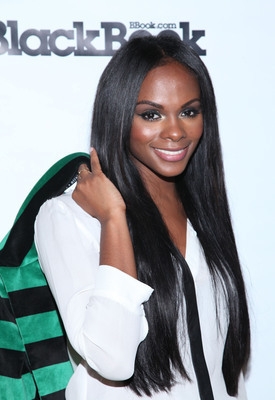 Soaps.com has the latest details surrounding what’s going on in the careers of the former “One Life To Live” actors. This week includes one actress filming with Rapper Ice Cube, another in a feature surrounding a drug addict/male stripper, a special one-woman holiday show, and how many Llanview alums weathered Hurricane Sandy…

Tika Sumpter in Ride Along:
The actress who played Layla Williamson, and recently appeared in the Whitney Houston film “Sparkle,” has been cast in the new film “Ride Along.” Though the project is still in the filming stages it follows a school security guard (Comedian Kevin Hart) who goes on a ride along through hell with his fiancée’s cop brother (Rapper Ice Cube).

Teddy Sears a Master Of Sex?
Last week we alerted fans to Teddy Sears’ (ex-Chad Bennett) “666 Park Avenue” guest spot, and this week we have a new film role to reveal. Sears will appear as Dr. Austin Langham in the upcoming film “Masters Of Sex.” Starring Michael Sheen (“The Twilight Saga’s” Aro) the storyline focuses on the science of human sexuality and the research based off of the sexual revolution.

Jackie Hoffman’s A Chanukah Charol:
The funny actress who played Llanview’s Eunice Burns will be taking her one-woman show back onstage. Jackie Hoffman’s “A Chanukah Charol” has been a holiday favorite inspired by another favorite “A Christmas Carol,” in which she’ll reflect on her life (past, present, and future) with the help of a few ghosts. Performances will begin Saturday December 8 and run through Saturday December 22 at New World Stages at 340 West 50th Street (between Eighth & Ninth Avenues) in New York City, New York. As an added treat there will be a special performance on Tuesday December 29. Please visit New World Stages for times and ticket information.

Alice Barrett Mitchell talks Doubt role:
Llanview fans will remember the actress for her role as Dr. Morrison, and back in October we brought news about Alice Barrett Mitchell in Doubt. Mitchell talked to Soaps.com about her new project and the character she plays. “To say it’s daunting to take on a role previously played by Cherry Jones [“Awake”] and Meryl Streep [“Hope Springs”] is an understatement, to say the least. But I have thoroughly enjoyed the opportunity to work on this beautifully crafted play. Sister Aloysius is unlike any other role I’ve played and I embrace the challenge and thrill of it.” Visit the T. Schreiber Studio and Theatre for ticket information.

Jacqueline Hendy in Long Shot Louie:
Remember Llanview's Vanessa Montez Vega, the woman who convinced Cristian Vega (David Fumero) to marry her then shot Ray Montez (A Martinez) in 2009? Jacqueline Hendy has just been cast in the John Bianco film "Long Shot Louie" as Aleena. Described as a dark and gritty drama, the film surrounds a drug addict and a male stripper named Louie Lazzaro (Steve Stanulis, "I Married A Mobster"). Watch for its release sometime in 2013.

Kamar de los Reyes sings Niño Precioso:
By now most are aware that Kamar de los Reyes (ex-Antonio Vega) is starring in Activision's upcoming and much anticipated video game Call Of Duty: Black Ops 2. Here's something to keep an ear out for during all of the fictional fighting come its release on November 13… If you suddenly hear a break from the rapid gunfire while you, your kid or husband are fighting alongside those in the graphic world it could be the moment with Reyes' character, Raul Menendez, takes some time out to sing "Niño Precioso," which means "Precious Child."

Former One Life To Live actors weather Hurricane Sandy:
Last week Hurricane Sandy wreaked havoc on the east coast, and Soaps.com sends our sympathy to everyone affected. Read how a few former Llanview actors took cover and reported their experience during the torrential downpour and high winds…

I'm dry and safe. Never lost power at my apt in NYC...this storm has devasted the tri state area and beyond

Power back on..Max and Willie, my 2 dogs were a little scared. I wasn't too scared, well maybe a little. Mom slept on the couch w me

This is mom in CT.Thanks for all your concern and well wishes for Shenell. Power went out last night and still out for her in NYC.

And there goes my power. Dammit. Almost made it.

Totally in the dark.My internet is not working though I've a Verizon hotspot charged. It's so eerie hearing the howling wind by candlelight.

Winds gusting-downed branches in backyard.Know I'm LUCKY--I'm in bed-watching TV:) Escapism is a port in the storm. Gratitude's my attitude

I have Titos, olives, husband and knowledge that my kids are safe. I am good.

#Sandy has me still w my mom safe, warm, grateful and in another state. Praying for those everywhere, especially in Jersey.

This is the great team I worked with today to help redirect marathon supplies to victims of hurricane Sandy. twitter.com/JasonWTam/stat…

One Life To Live Fun Fact:
Mark Lawson, who played Llanview's Brody Lovett from 2008 to 2012, took part in a 1999 semi-pro Mixed Martial Arts fight. After winning, he retired with an undefeated record of 1-0. So what turned him on to acting? He graduated with a degree in Musical Theater from The Boston Conservatory and was also a graduate of the London Academy of Music and Dramatic Art.

If you missed how you can watch Melissa Archer (ex-Natalie) and David Gregory's (ex-Ford) new film in the comfort of your own home view last week's One Life To Live Soap Digest.

Do you want to know what the former Pine Valley actors are doing too? Read our All My Children Soap Digest each Tuesday as well!