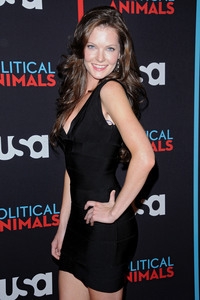 Not the role she had in mind…

Their Llanview characters might not have crossed paths often, but two former “One Life To Live” actors are currently working on a new project together. Meghann Fahy (ex-Hannah O’Connor) and Nick Choksi (ex-Vimal Patel) will be appearing in “Fifty Grades Of Shay.” Incidentally, Choksi is directing the short comedy and had a hand in writing it as well.

Since leaving Daytime behind Fahy has had recurring roles on “Necessary Roughness” and “Political Animals.” Choksi is currently working on the 2013 release “Home,” which also stars former “All My Children” actress Tonya Pinkins (ex-Livia Frye Cudahy).

Was Llanview’s David Vickers your favorite character? Watch the actor amuse the crowd through Tuc Watkins The Ladder Party Video.

Find out how “Emmerdale’s” Moira makes a situation worse through Soaps.com’s Soap Scoop: UK/Australia Edition then hear where Britney Spears and her fiancé were spotted through Soap Opera Fan Blog’s Star Gazing.