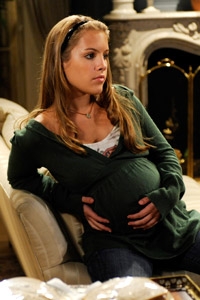 Although our title would lead you to think one of One Life to Live’s actresses just gave birth, we have a whole other scoop in mind for you!

For those who don’t want to know any type of spoiler details involving the upcoming births of Starr (Kristen Alderson) and Tess’ (Bree Williamson) babies, turn back now, don’t read any further…

Okay, for those brave ones who stayed, here’s the deal! Although we’re not going to go into details about the storyline, we just found out that Starr and Tess’ newborn babies (Baby Cramer and Baby Chloe) are going to be played by many in the first couple of scenes – mostly the hospital scenes. However, whenever you see a little baby next to a pacifier with a stuffed animal attached, you’ll know she’ll be one of the Sullivan triplets playing the part!

Tess, Madeline and Molly Sullivan have been in the studio, with their mom and dad, of course, taping the scenes, which will start airing on Thursday November 6. While stumbling across the blog of the girls’ proud parents, we also saw reference to a little four-year-old girl, named Stephanie, who apparently has been taping in the part of Bree! Could it be the show is planning to age her right before our eyes? Another case of Soap Opera Rapid Aging Syndrome? Stay tuned!

Soaps.com wants to congratulate the Sullivan’s, and their adorable little ones, on their upcoming appearances!

One Life to Live Video Clip:...