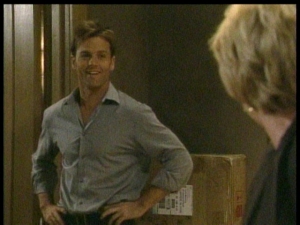 Happy Halloween everyone! Thanks for fitting my thoughts in before your Friday night parties and trick or tricking! All the little Ghouls and Goblins will be out tonight, so let’s get right to the highlights of this week’s storylines in Llanview!

Todd may be the next Super Nanny, but he can’t fool Viki!

“Jessica wouldn’t do that,” Viki says to Todd, about the fact that Jessica covered for Todd. “But Tess would – in a heartbeat!” … It was so cute to see Todd playing gleefully with a laughing Bree as he ranted about becoming a grandfather – while reassuring Bree about the wacko lady who was hiding her mother! No matter what anyone says about Todd, we can’t deny that he is a good father – when he doesn’t let his scheming ways take over. Good father or not, Viki is a better mother, and I loved watching her stand her ground against Todd, which she always does, and was so thankful she took Bree home!

“Are you done blasting me?” Tess asked Natalie and Jared then went to her bag, took out the dynamite and continued, “Because now it’s time for me to do the blasting!” Finally, Jared and Natalie came up with a plan to get out of the secret room, and it almost worked! Some may think setting a fire was a little risky, I did at first, but if the flames got too high they could have always pulled the drawer back and put it out – hopefully before they met their fate through smoke inhalation. However, a little Boy Scout kindling was the least of their worries when Tess arrived with gourmet food – and a side of dynamite! When Tess began having pains, I actually felt ‘Jessica’s’ pain… Not her labor pains, literally – although I know what those feel like, but the pain of losing Nash. Now everything is coming to a head, and I’m praying she’s not going to lose one of the only things left of Nash… her unborn child. I’m just thankful that Tess had the sense to leave Bree at Todd’s because I don’t think Jessica could ever recover if she lost both of her children.

Since stormy nights and Halloween go hand in hand, let’s take a look back at when Nash and Jessica first gave in to their desires on one stormy night in Llanview…

Sniff, sniff… Oh, sorry, give me just a moment to wipe away my tears… I can’t help it… I’m still not over the show killing off Nash. Nevertheless, on with my thoughts…

Ray points the finger at Vanessa!

“Vanessa set me up,” Ray told Antonio and Talia… All of the cards are finally out on the table, and although many probably won’t believe the words of a convicted murderer, I do! I could tell from day one that there was something more to Vanessa than just a damsel in distress, and I think she’s the one who killed Ray’s wife – plain and simple. The only thing that stinks is, I hope this comes out before Ray leaves Llanview, if I’m right, as it was mentioned that the actor, A Martinez, could very well return to the show in the future.

Clint grows a conscience and Nora gets Buchanan Enterprises back!

Clint admitted feeling horrible about his scheme involving Langston, to which Nora replied, “Good,” then handed him a paper – giving him back B.E.! “You’re welcome,” Nora said… After that big apology and sincere attitude toward what he did, I will admit, I am warming up to Clint again, but I still don’t see him and Nora as a couple for long. Whether it be for lack of airtime or due to other outside interferences, I just have this feeling that they are not meant to be.

John works overtime… with a fish?

“I had a relationship with her,” John admitted to Oliver while working to prove that Marty was the mystery woman camping out at Todd’s… The show has really found a gem in the cute Officer Oliver Fish. Is John finally allowing someone to help him in his quest, or he is using Oliver out of pure desperation? You be the judge. In any case, I like their interactions, which leads me to my funniest quotes, yes two of them, of the week… “Sounds like Todd’s trying to keep someone liquored up and laid,” Oliver told John after finding information in one of Todd’s bank accounts, and a photo of Keys on a surveillance camera, to which John replied, “You’re a smart fish!”

Cole delivers a letter to Marty's grave, and Starr is just ready to deliver!

Poor Cole, I felt so bad for him as he read his 'Letter To My Mom' in Marty's tomb but was happy to see Starr arrive to comfort him - and was ecstatic that her water broke in Cole's presence! I know they are young but something in me craves for Cole and Starr to try to make a go of it, with the guidance of their families, and raise their baby together.

"I'm giving Rex a divorce, but you better treat him right or I'll come back here and flatten you," Adriana warned Gigi… I can hear you all cheering now! At least, one of the big storylines have wrapped up. Well, sort of. I'm glad Gigi and Rex are finally together, and I look forward to watching them grow as a couple. But as parents, I think they still have a long road ahead of them where Shane is concerned. I'll say it again, please ABC, don't take Brody off screen, as I think his character has so much more to offer Llanview.

Don't forget to vote in my special Halloween "Let's Play Dress-up" Poll below and feel free to leave me a comment as well! If you haven't already checked out Soaps.com's Halloween treat to you, our readers, please take a peek in the Latest News Room to watch a past Halloween video clip from each soap, and don't forget to watch the latest One Life to Live Promo video clip in our News Room! You think things are out of hand now, you have no idea what's yet to come!

http://s3.polldaddy.com/p/1055796.js Which Llanview hottie would you like to see in 'what' this Halloween?
( surveys)

Until Monday, have a wonderful weekend! Trick or treat, and as always, thanks for stopping by!