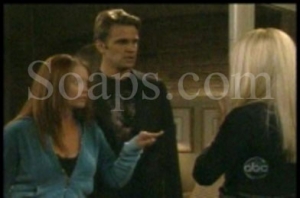 “We’ve got to figure out a way to get out of here.”

In this week’s “One Life To Live” flashback Friday Soaps.com takes readers back to October 13, 2008 when Tess managed to lock both Natalie and Jared in a hidden room at Llanfair.

When word came that Natalie had gone missing no one had any idea that Tess had locked her in a secret hidden room in Llanfair’s basement. Jared suspected Tess had something to do with Natalie’s disappearance and acted as though he’d never loved her in order to get Tess to lead him to the love of his life.

Jared made his way to the basement and found Natalie in the room, behind soundproof glass, and managed to gain access in an attempt to save her. However, in true Tess fashion, she wasn’t far behind and locked Jared in the room as well, where he made it clear he’d never stopped loving Natalie. It looked as though Viki would save them, after thinking she’d heard a noise downstairs, but hope was lost when Viki never made it to the room.

Their next glimmer of hope came when Jared got a signal on his cell and got through to Viki. However, the signal was lost. Tess appeared and threatened to kill Viki if Jared didn’t turn over his phone. He had no choice but to take Tess’ warning seriously. Later, Charlie, Viki, Bree and Tina made their way to the basement and noticed a fake wall, which when moved revealed their loved ones! It wasn’t an easy task getting Natalie and Jared out, due to the bomb Tess has set, but Charlie succeeded in the end and sacrificed his own life to save the couple.

Take a look back at how Tess lured Jared into the room with Natalie, and how Charlie saved them, through these flashback Friday videos…

Tess lures Jared in with Natalie…

If you missed them take a look back at last month's Flashback Friday videos One Life To Live: Tina's Wedding Slipup.

There's about to be a tragedy in one late night show. Find out more through Soaps.com's Primetime Spoilers. View a funny take on a scene involving "General Hospital's" Anna and Dante through Soap Opera Fan Blog's Soap opera screen captures.

One Life To Live Videos: Remember...