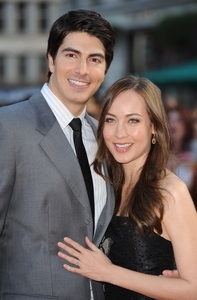 He appeared as Clark Kent/Superman in 2006’s “Superman Returns” and prior to that tried his hand at Daytime television as “One Life To Live’s” Seth Anderson. Actor Brandon Routh has maintained a successful career and now has something outside of television to be very excited about…

People Magazine is reporting that Routh and his wife Courtney Ford, who he’s been married to since 2007, have just welcomed their first child together. Their son, Leo James Routh, entered the world at eight pounds on Friday August 10. Soaps.com sends the new parents our best!

For those who have missed out on Routh’s work since his Llanview days back in 2002, he’s appeared in such hit shows as “Cold Case,” “Chuck” and will star as Wyatt in the new CBS Primetime series “Partners,” which debuts Monday September 24 at 8:30 PM.

If you’re a “DOOL” fan who can’t wait until the show returns today, get a little preview of what’s set to happen in Salem through Soaps.com’s Soaps Spoiler Digest, and don’t forget to read our Pretty Little Liars recaps each week.