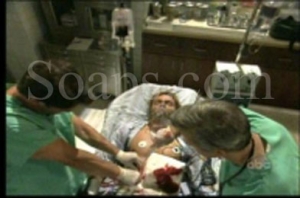 Brody first came on the scene when Dorian, Adriana and Layla located him and convinced the man who Gigi Morasco claimed to have fathered her son Shane to return to Llanview with them. Gigi was stunned to see Brody, who she had been told died years ago, and continued to allow Shane to think he was his father. Gigi went along with Brody’s insistence to continue claiming to be Shane’s father and watched as Shane and Brody bonded. Not able to take the guilt any longer, Gigi warned Brody the time had come to tell Shane the truth – that Rex was really his dad.

The fear of losing Shane set Brody on a path of destruction. Brody took Shane up on Llantano Mountain and refused to let him go. A few people, including Rex, joined them, and pleaded with Brody to release the boy. Brody started feeling as though he was back in the war, got confused and shot Rex! He was later taken into custody and sent to St. Ann’s for rehabilitation.

Do you remember which character wasn’t on the scene when Brody shot Rex? Vote your knowledge in our poll…