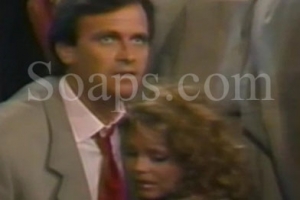 In this week’s Throwback Thursday Soaps.com takes readers back to 1988 when a crazed man named Patrick London underwent plastic surgery and impersonated Bo Buchanan in an attempt to take over his life…

Bo had been married to Didi O’Neill, and the two, along with Bo’s ex-wife Delila Ralston, were held hostage by Patrick in a bunker. Patrick returned to Llanview as Bo. Many were stumped that ‘Bo’ was no longer married to Didi and that he had been acting quite strangely.

It wasn’t until several months had gone by when everyone learned ‘Bo’ wasn’t the real Bo, but a man who executed the scheme as a way to take over Buchanan Enterprises. The real Bo escaped the bunker, and though he may have gotten his life back, Bo lost something dear to him throughout the ordeal… His wife Didi.

During a showdown between Patrick and Bo, Didi ended up dying in Bo’s arms… Do you remember what caused Didi’s death? Vote your knowledge in our poll…

If you missed last week's throwback poll check out One Life To Live: Viki and Ben at Crossroads.