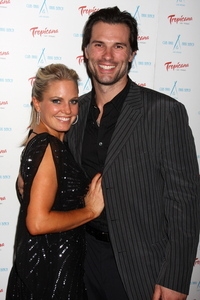 Former “One Life To Live” actors Austin Peck (ex-Rick Powers) and Terri Conn (ex-Aubrey Wentworth) are expecting their first child together. ABC Soaps In Depth is reporting that the actor has released details – he and Conn are having a baby girl, which will be due toward the end of the year. The couple married last July 1. This will be their first child together, though Peck has two sons, Aiden and Roman, and Conn a daughter named Julia.

Conn appeared in Llanview as Aubrey Wentworth/Christine Karr from 2010 to 2011. She played opposite Peck on “As The World Turns” as Katie Peretti from 1998 to 2010 and most recently turned up as Kerrie on “30 Rock.”

Remember the actress who played Hannah O’Connor? Find out more about Meghann Fahy To Chicago Fire.