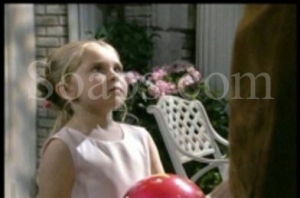 Soaps.com is taking our readers on a Llanview scavenger hunt. Bree Brennan was very little when her father Nash fell to his death. Months later, Jessica was haunted by a feeling that Nash was reaching out to her and even got a glimpse of a man wearing his brown jacket. Further more, she was pushed over the edge when Bree claimed her daddy had appeared and had given her a gift. Do you remember what the gift was? We will give you a hint… It wasn’t the red ball Bree is holding in the photo.

If you don’t remember, the answer can be found in one of the profiles in our One Life to Live Cast List.

While you're at it, take a guess at our One Life to Live Holiday Shift Poll.