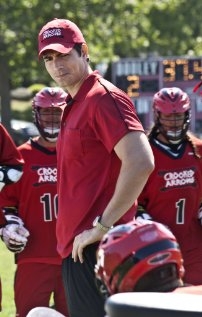 Former “One Life To Live” actor Brandon Routh (ex-Seth Anderson) is appearing in the new film “Crooked Arrows” as Joe Logan. The film surrounds the journey a Native American lacrosse team takes as they make their way through a prep school league tournament. Gil Birmingham (“The Twilight Saga”), Michael Hudson (“1313: Billy The Kid”), and Chelsea Ricketts (“The Killing”) also appear.

Routh first arrived in Llanview in 2001 as Seth Anderson and helped Natalie Buchanan (Melissa Archer) reveal to everyone that she was the long lost daughter of Victoria Lord (Erika Slezak). After leaving Daytime in 2002, Routh appeared in “Cold Case” as Henry Phillips, “Will & Grace” as Sebastian, “Superman Returns” as Clark Kent, and “Chuck” as Daniel Shaw. He is currently working on the short production of “Number Nine” as John.

For more on the actor, and to watch one of his past Llanview scenes, check out Brandon Routh to Partners.