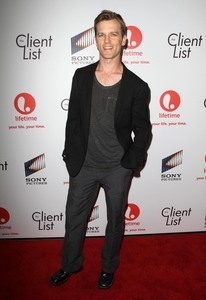 Popular “One Life To Live” actor Trevor St. John, who played Todd Manning/Victor Lord Jr. from 2006 to 2012, is currently filming a new movie, “Tarzan.” The storyline follows Tarzan (“Twilight Saga’s” Kellan Lutz) and Jane Porter (“Cougar Town’s” Spencer Locke), who go up against a mercenary army dispatched by the evil CEO of Greystoke Energies – a company once ran by Tarzan’s parents before they died in a plane crash.

St. John will appear as William Clayton. Other actors cast include Mark Deklin (“Hawaii Five-0”), Jaime Ray Newman (“General Hospital’s” ex-Kristina Cassadine), and Brian Huskey (“Veep,” “Hart Of Dixie”). The film is expected to be released in Germany sometime in 2013.

Since leaving Daytime behind, St. John has completed a made for television movie, “Intercept,” and recently appeared on Lifetime’s “The Client List.”

Find out where else you can catch one of St. John’s castmates through Jaime Ray Newman’s Red Widow Spoiler Video.