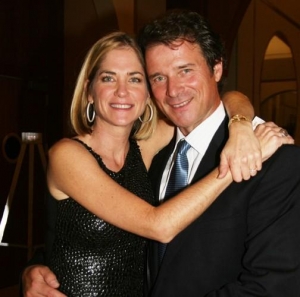 Former “One Life To Live” actors, and real life husband and wife team, James (ex-Max) and Kassie (ex-Blair) DePaiva have been cast in the Broadway musical “110 In The Shade.” The production is based on N. Richard Nash’s 1954 play “The Rainmaker.” The all-American love story takes place in the hot and drought-stricken American southwest and focuses on a con man who brings sweet relief to the dried up life of a small-town virgin.

Fans can catch performances on May 9, 10, 11 and 12 at 2:00 PM and 7:30 PM at The G&L Theatre at the Community School of Naples in Naples, Florida. Please visit Theatre Zone to reserve your seats today.

Since leaving her Llanview role, DePaiva did a crossover as Blair Cramer on “General Hospital” and is now selling her art to the public. Check out Kassie DePaiva’s art and find out how you can own one of her future creations.

Though DePaiva left his Llanview role in 2007, he’s stayed busy with such plays as “Nightmare Ally” and “Tricky Wicked Bitch.”

Did You Know Video: Ex-One Life To...