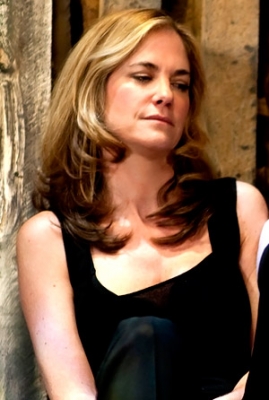 Soaps.com’s Throwback Thursday takes readers back to the end of 1995 when Blair Manning thought her husband Todd Manning had died. Todd had traveled to Ireland to make amends with Marty Saybrooke. After being mistaken for Patrick Thornhart, Todd was believed to have been shot and killed.

From the beginning of 1996, Blair vowed vengeance against Marty for Todd’s death. She seduced Patrick on August 16, 1996 and became pregnant with his child. Little did Blair know, Todd was alive and watched her and Patrick from the shadows. Todd soon revealed himself with his main goal being to punish Blair for being unfaithful.

A custody suit over Starr was in full swing between Todd and Blair. When Starr was diagnosed with aplastic anemia, Blair’s unborn child ended up being a match for a bone marrow transplant. However, Patrick and Blair were in a car accident, which resulted in the death of her unborn child, who she named Brendan.

Do you remember who was behind the wheel of the car that caused the accident? Vote your knowledge in our poll…

If you missed last week's throwback poll check out One Life To Live: Disastrous School Dance.