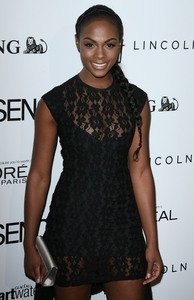 Former “One Life To Live” actress Tika Sumpter (ex-Layla Williamson) will be appearing in a new one-hour drama on BET. “Being Mary Jane” will focus on the state of the single Black professional female. Gabrielle Union (“Think Like A Man”) will play the lead role of a self sufficient TV anchor named Mary Jane Paul, who tries to juggle work, love, family and fill the missing aspects of her life.

Aside from Tika, The Bold And The Beautiful’s Aaron D. Spears (Justin), Omari Hardwick (“Breakout Kings”) and Richard Roundtree (“Diary Of A Single Mom”) have been cast in the series, which will be the network’s first one-hour drama. Soaps.com has more scoops through our Primetime Dish column.

If you haven’t already, check out the movie trailer for Tika Sumpter in Sparkle, also starring the late Whitney Houston.