One Life To Live Fan Fiction: A Face From Jessica’s Past 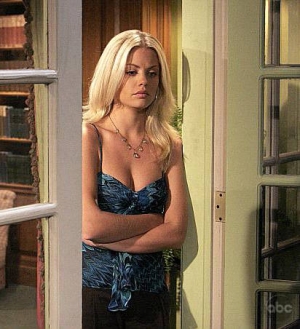 “I bet you could use a friend.”

Jessica sits in the library at Llanfair, holding Ryder, noting how much he’s starting to resemble Ford. “Your Daddy would get such a kick out of your dimples.” Jessica rubs her baby’s cheek, remembering the same little indents on Ford’s face. Bree appears and asks, “Do I look like my Daddy?” Jessica nods and pats the space next to her. As Bree cuddles up to her mom, Jessica recalls how Nash’s eyes use to sparkle just like their daughter’s. Now Jessica’s alone to raise her children, both of their fathers taken from them far too soon.

She places Ryder in the gated enclosure on the Persian area rug and leaves the door open only long enough for Bree to join him with his toys. With the children safely secured, Jessica opens the patio doors and stares out into her mother’s rose gardens. She used to visualize her first daughter Megan running through the paths between the bushes. Jessica has to believe that Megan’s now in Heaven with Nash, Ford and her other baby girl, Chloe.

Something white catches Jessica’s eye… A ruffled sleeve, the bottom ruffle of a flowing dress. The little girl is too far away to identify yet Jessica glances back inside to make sure Bree hadn’t slipped out. There Bree sits, still with Ryder, dressed in jeans and a Foxy Roxy’s t-shirt, one Roxy had insisted Bree have after their girls’ day at the only salon in Llanview. Jessica smiles at the memory and how nervous she’d been to let Roxy cut off the six inches Bree insisted she’d grown out of. She turns back to the gardens, which no longer hold the vision of the girl in the white dress. “Goodbye Megan,” Jessica catches herself saying out loud, as she rubs a chill from her arms.

“Jess?” Natalie asks from behind her, now holding Ryder. “Are you okay? I heard Ryder fussing on my way to the kitchen.” Jessica doesn’t need to answer for Natalie to realize she needs some time alone, the grief from losing Ford still apparent on her face. “I’m fine,” Jessica replies and reaches out for Ryder. Natalie offers to take him and Bree off her hands. Liam’s napping, and John’s still in Port Charles, so she’ll entertain the kids in the playroom for a bit.

Jessica thanks Natalie then settles into a chair out on the patio. Bringing her knees to her chest, she wraps her arms around them and stares at the moisture on the window, willing the tracing of a heart to reappear. It doesn’t, as she recalls the last time it did – after Nash died, shortly after he’d traced one to her palm on his deathbed. She looks through the living room to the front foyer, remembering the times Ford would appear to pick up Ryder and later to pick her up too. They’d created a family but would never get the chance to live out a lifetime of happiness.

Tears begin to stream down her cheeks. Through blurry vision, Jessica watches, barely hearing the doorbell ring, as Lois answers the door. Llanfair's longtime housekeeper turns and looks Jessica's way, interacts with their visitor then closes the door and disappears into the kitchen.

Jessica wipes away her tears and heads back inside. So much has happened in her life and all she craves now is a sign that she'll be okay, that she'll be able to move on, be there for her children and one day find love again.

"I bet you could use a friend," a male voice says from the patio doorway… a very familiar male voice. Slowly, Jessica turns and faces the one man she's hurt most in her life. A man she once loved more than life itself. A man who still loved her when she turned into Tess and one who left town after she grew to love Nash Brennan as much as her alter. "Antonio," Jessica whispers. He walks to her, placing his hands on her face then simply draws Jessica into his warm embrace, allowing her to grieve openly, silently wanting her to know that he never stopped loving her… that everything was going to be all right.

After all that Jessica put him through, do you think she and Antonio could have had a life together - if he'd returned to Llanview? Share your theories or feel free to pick up where I left off with your own fan fiction in the comment section.

If you missed our last story check out Soaps.com's One Life to Live Fan Fiction Cole And Starr Get News In L.A.

Sofia Laine: 5 Things About Vanessa Bryant’s Mom Who Claims She Was Kicked Out Of Her House