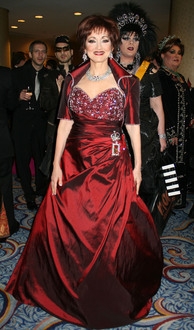 Come out and meet Robin.

Former “One Life To Live” actress Robin Strasser (ex-Dorian Lord) will be in attendance at this year’s Night Of A Thousand Gowns on Saturday March 31. The event will run from 6:30 PM to 12:00 AM at The Broadway Ballroom of the Marriott Marquis Hotel, Times Square, Broadway at 46th Street in New York City, New York.

Robin took to Twitter and tweeted, “March 31st Fun Fundraiser! Drag Queens and Divas-is there a diff? @the Imperial Court of NY Night of a 1,000 Gowns. I’m wearing glam Gammie.”

Their Most Imperial Sovereign Majesties Emperor XX Vanity Society and Empress XXV Pepperica Swirl and the membership of the Imperial Court of New York invite fans for what’s been branded as the most lavish, glamorous, outrageous event in New York City. It’ll feature a cocktail hour, open bar, full-course dinner, dancing, and their famous Viennese dessert buffet, not to mention a line-up of star-studded entertainment.

If you missed it, check out Robin Strasser’s NBC News 4 Video Interview.