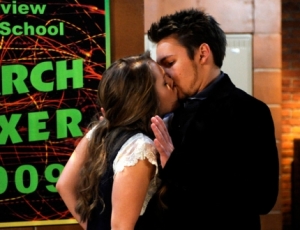 In this week’s “One Life To Live” flashback Friday Soaps.com takes readers back to January 9, 2009 when the kids of Llanview High got their first look at Schuyler Joplin, the new biology teacher.

Starr Manning had a crush on Schuyler and realized he was the son of Dr. Joplin. Considering the doctor committed suicide after thinking she caused the death of Cole Thornhart and Starr’s baby, Starr blamed herself for his loss. He tried to reassure Starr and insisted to authorities that he knew nothing of his mother’s and Todd Manning’s plans to kidnap Starr’s baby. Todd didn’t like Starr’s new teacher right off the bat because of his parentage.

Cole didn’t like Starr and Schuyler’s connection either and caught Starr kissing her teacher at a school dance. He immediately pulled Schuyler away and tried to strangle him, thinking he’d kissed Starr. Cole went to Todd with this information, which led to Todd assaulting Schuyler and ultimately getting him fired from Llanview High.

Revisit when Starr first laid eyes on the man who made thoughts of Cole go by the wayside in a Llanview heartbeat, as well as realizing Schuyler was the son of Dr. Joplin, through these Flashback Friday videos…

Take a look back at last week's Flashback Friday videos One Life To Live: Switched At Birth.