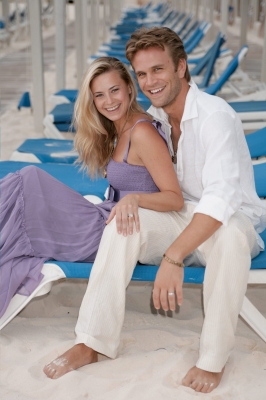 New baby in the fold.

Former “One Life To Live” actors John Brotherton (ex-Jared) and Alison Raimondi (ex-single mom) have reason to celebrate these days. The couple just welcomed a new baby girl to their family! Joining 18 month old Shia Bellatrix, Saylor Callisto was born on March 3 with John announcing her arrival on his Facebook stating, “Her mother is a rockstar and her daddy is lucky.” Alison posted a photo of John and their new daughter and stated on her Facebook, “Blessed yet again…”

John played the role of Jared Banks from 2007 to 2010 when his character died at the hands of Mitch Laurence (Roscoe Born). His wife, Alison, appeared in 2008 as a single mother during Starr’s (Kristen Alderson) pregnancy storyline.

Revisit Jared’s end in Llanview through our “One Life To Live” Remember When Mitch Killed Jared video.

More Than 13,000 People Are Using This $20 Smart Scale To Track Their Fitness Goals