One Life To Live Flashback Friday Videos: Trapped In A Wine Cellar 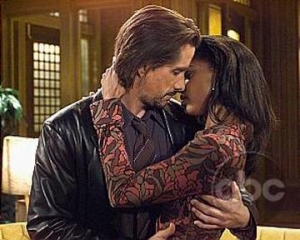 In Daytime, trapped in a room leads to love in the afternoon.

During this week’s “One Life To Live” flashback Friday Soaps.com takes readers back to June 29, 2004 when John McBain and Evangeline Williamson found themselves trapped in a wine cellar. Prior to this, Evangeline took on a case involving a strip club that had ties to the notorious Santi mob family. This made her a target and soon a dead body was found in her law office. She went to John McBain for help, who realized the dead person had been an associate of his.

While investigating why Evangeline’s client, who also turned up dead, and John’s former friend had ties to the Santis, they ended up trapped in a wine cellar. Out of boredom, they did a few too many wine tastings and ended up making love. Revisit how it all went down through the videos below…