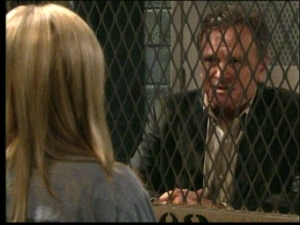 Welcome to Amy’s
“One Life in a Week!”

Oh, the mystery in Llanview on One Life to Live has kept us on our toes this week! We watched as Gigi and Rex’s love grew to a new level while fighting to get back to a life that seemed so close – yet years away! I was happy to see that Gigi’s longtime secret was the one and only thing that enabled the couple to return from a zany trip back in time back to the present! Although they appear to be on the same page now, where Shane is concerned, Brody isn’t willing to give up Shane, which should make for a real custody pull – given the planted DNA on the toothbrush!

I got a real kick out of Bo’s return home! All the comical talk about ‘this dream’ that he had, and how he stared at Jared, Nigel and Dallas in awe, reminded me of the ending to the Wizard of Oz! It was nice seeing Robert S. Woods interact onscreen with his real life wife Loyita Chapel (Dallas) – and did anyone wonder who the cute ‘young Bo’ was during the last scene in 1968 when Professor Fina handed him Rex’s fallen nametag reading, Bo Buchanan? The actor was none other than Tanner Woods – Robert and Loyita’s real life son! On another note, like I said last week, I love this new Nora/Dallas rivalry!

I was both touched and saddened when Bo paid Lindsay a visit in Statesville. I’m happy that Bo has found peace in his life, but I sure will miss Lindsay causing havoc in Llanview. However, this is soapland, so maybe she’ll get another pardon and come back home soon! And with Bo back as Commissioner, anything’s possible!

On to Clint and his revenge against Dorian… I find that Clint using Jared to do his dirty work makes Clint just as bad as Jared in some ways. However, Clint knew that Natalie would be so against it – and knows that Jared will do whatever it takes to make amends – so could this be Clint’s way of causing friction between them – maybe breaking them up for good? Again, brilliant? Hmmm… maybe! I just don’t want to see Langston be the one hurt as a result of this mess.

Just when I thought Talia had given up, and had forgotten all of her police training in its entirety, she went off and put Jonas to the ground - literally - then knocked her own father over the head for the man she really loves! While I would have thought that Antonio, Talia, Cris and Sarah would have made a mad dash for the states, what better way to get their sweet revenge than to put Carlo and Jonas in bed together for all of Mendorra to see! Not only was their scheme comical, it gave us all a totally different view of the scary mobster himself! At least Antonio has rescued his maiden in distress - and now Carlo is left to face his maker... Again.

While Blair and John are clearly struggling with their lingering feelings for Marty and Todd, their attempt to forget their past significant others through hot sex is just fine by me! After all, they could be stewing in a bunch of depressing scenes, so who wouldn't want to see the time pass with some really smokin love scenes? In all fictional reality, they do appear to have genuine feelings for each other, even if they are on more of a 'best friend with benefits' basis!

A Tess and Todd alliance! I couldn't be happier about this! What's really neat is that the secrets they are blackmailing each other with are so powerful that I think one would even kill for the other at this point, which brings me to my funniest quote/scene of the week… Although I watched intently when Todd dragged Tess away from Marty, and back to the main house to give her a stern Todd-like warning, I burst out laughing when Tess showed no fear and laughed hysterically herself saying, "You're playing house with a woman you raped, and she doesn't even know who you are!" And now Tina has installed a bug in Todd's head about Tess and her basement activities… Boy, I'm wondering if more family members will end up in Tess' secret room than planned - hey, maybe Todd will store John and Blair in there as well, especially after losing custody of Sam - again!

Thanks for stopping by to read my Friday column! I hope you will leave your thoughts below to let me know where you stand on these storylines - or if your initial thoughts on others have changed! Also, be sure to vote on your current storyline favorite in the new poll below:

Given the upcoming Labor Day holiday on Monday, September 1, 2008 the show will be pre-empted, (you can read the full list of daytime pre-empts here) so I'll see you all back here on Tuesday, September 2, 2008 for another fun week in Llanview!

One Life to Live's Ty Treadway...