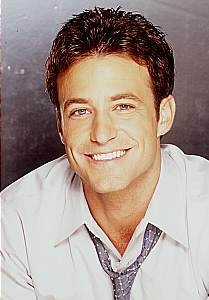 Okay, everyone, don’t get too excited! We all know that One Life to Live’s Colin MacIver died back in May of 2001 after being pushed down the stairs. So how can Ty Treadway be coming back to Llanview? Maybe as Troy MacIver, Colin’s twin brother who’s been locked up in Statesville prison for trying to kill Nora in a dual suicide attempt, or maybe as Colin himself? You guessed it, as Colin himself!

On October 1 and 2, 2008, we’ll see Colin appear as a game show host in a dream sequence through the mind of Rex Balsom (John-Paul Lavoisier) titled “So You Think You Can Be Shane Morasco’s Father!” While we can’t tell you why Rex will be knocked out and so deep into his mind, for fear of ruining the storyline for those who want a huge surprise, you will find the backdrop for the dream to be very familiar! It was filmed on the set of the ABC game show “Who Wants To Be A Millionaire!”

Since leaving the show as Colin in 2001, Ty co-hosted SOAPnet’s Soap Talk until the show’s cancellation in 2006 and appeared on the primetime hits Jag, Cold Case and Rodney.

Soaps.com is very excited to see Ty on the show again! We can’t wait to see who takes part in this game show dream and we want to send a big welcome back to the host himself!

One Life to Live's Chris Beetem:...