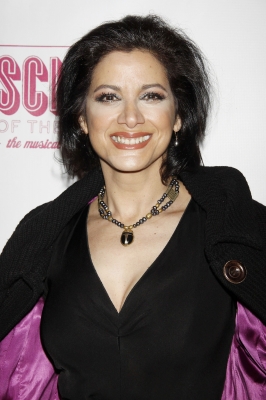 Former “One Life To Live” actress Saundra Santiago (ex-Carlotta Vega) will be appearing in the new made for TV Hallmark movie “Meddling Mom.” The two hour original movie, which is currently filming for its Mother’s Day 2013 world premiere, will have the actress playing Valeria. It will star Sonia Braga (“Angel Eyes,” “Páginas Da Vida”) and Tony Plana (“Desperate Housewives,” Ugly Betty) and is written by Nina Weinman, based on a story by Paul Longo.

The movie will surround Carmen (played by Braga), who moves in with her daughter and son-in-law and has a habit of leaving behind notes of manipulation. Carmen has no idea but will soon find out that her family plans to teach her a lesson in butting out.

Saundra took over the role of Carlotta on September 3, 2009 from Patricia Mauceri, who played the character from 1995 to 2009. Since her Llanview role, Saundra appeared in “Person Of Interest” as Patti D’Agostino in 2011.

Find out what another former actor is currently involved in through Javier Morga In Aaron’s House.