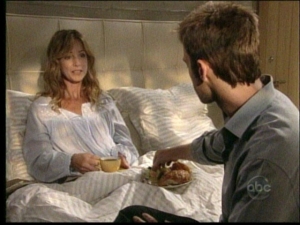 Welcome to Amy’s
“One Life in a Week”!

Happy Friday, everyone! I’m glad you all stopped by for my weekly One Life to Live column, so let’s all get into analyzing mode and see what the show had in store for us this past week!

Since I put my tail between my legs last week and admitted that I am now totally intrigued by the 1968 storyline, one I wasn’t too fond of in the beginning, I can tell you that I loved seeing Gigi finally make her way back to 1968 – and got a real kick out of her reaction to all the familiar faces who really weren’t familiar to her at all – especially when she thought Spencer was Shane and he reciprocated her hug with a kick! Now I just can’t wait for Rex and Gigi to make it back to 2008 and face all of the drama that is waiting for them there!

It was so nice to see Asa again, and my heart ached for Bo as he confessed his true feelings to his father surrounding how he’s felt all of his life. However, even though Asa may have taken the ‘shady road’ a time or two – or three or four – I know the man loved his family more than the billions of dollars he possessed and now I think Bo does too. I thought that fact alone was a great way for the show to wrap up Asa’s ghostly appearances! I still miss you dearly, Phil Carey!

We’ve all watched while Todd has lied to Marty about her past, and I was so excited to see that Marty was having dreams about not only John McBain, a man who Todd has instilled numerous lies into her head about, but of images from the actual rape! I’m hoping this means that Marty will be getting her memory back soon – little by little – and pray that Todd doesn’t try to deter this from happening through some special mind-altering concoction. Thank goodness Lindsay isn’t around to give him any tips, as well as RJ being in Llanview to sell Todd the fix!

John and Blair… I’m not sure how to take this relationship. What started off as just being a one-night fling, which I’m not complaining about at all because they are HOT together, appears to be heading down relationship alley? Here’s my prediction… Even though John has Marty on the mind, I think Blair and John’s feelings will evolve into something more, and just when they are borderline ‘in love’ Marty will resurface – and so will John’s feelings for Marty! Okay, so maybe that’s being too predictable but stranger things have happened!

How about Addie! I almost fell off of my chair laughing when Blair tried to sneak back into the mansion, after an overnight with John, and Addie stopped her with 'my funniest quote of the week'… "Blair, there's no shame in admitting you were out on a booty call!" Too funny!

I'm torn about Marcie adopting Starr's baby. While I commend Starr for the decision she's making, I have to say Todd may be right. Living in the same town, seeing Marcie raising her child won't only be hard for Starr but for Cole, Blair, Todd, and everyone else close to the two kids as a whole. However, seeing how quickly Blair took Todd's child with Margaret under her wing, I was so happy to hear Blair tell Marcie that if it weren't for Starr's decision, she'd be the one raising her grandchild. Just when we thought the doctor/patient confidentiality clause was sacred, Todd storms in and blackmails Starr's OBGYN! Maybe Todd should put The Sun aside, as more of a hobby, and become Llanview's newest private investigator!

So Clint is out for revenge against Dorian, I can get that, but when did Clint turn into such a schemer? And to use Jared, a man he loathes, to further his plan - and at the same time risk poor Langston's happiness to do so… Either this is utterly cruel or pure genius on Clint's part. You be the judge!

Onto the matter of Tess… Although I don't agree with all of Todd's devilish ways, I would so welcome an alliance between Tess and Todd! It would be beneficial to both, combustible in many ways, but would make for so many reactions from tons of Llanview residents that I think the whole town would be in an uproar! And if you're a soap lover, this is exactly what most thrive on!

I knew Antonio couldn't stay in Llanview long after leaving Talia in Mendorra, and I can't wait to see what kind of plan he has to bring her back! On another note, when Tina first told Sarah and Cris that she had just the thing to help Antonio in Mendorra I truly thought she was going to turn over the goods. However, Tina's decision to keep the jewels, instead of giving them to Sarah to help save Talia, only proves that Tina is still out for one person - herself!

There you have it, everyone, my "One Life in a Week!" Whether you agree or disagree, I encourage you all to chat below about your thoughts on all of Llanview's happenings!

One Life to Live's Melissa Archer...

One Life to Live's Chris Beetem:...