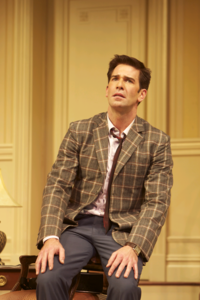 An American playboy in swinging 60’s.

Former “One Life To Live” actor Matt Walton, who played the devilish Eli Clarke from August 7, 2009 to October 26, 2010, will be making his Paper Mill Playhouse debut in Marc Camoletti’s classic farce “Boeing-Boeing.” Matt will star as Bernard, who’s an American playboy in swinging 60’s Paris and juggles three flight-attendant fiancées – one American, German and Italian. Bernard uses airline timetables and a phenomenally efficient housekeeper to convince each they are his one and only true love. It isn’t until… “a fast new Boeing jet puts the flight attendants on a collision course, hurtles his cunning deception toward disaster, and provides the lift-off for laugh after laugh.”

Matt shared with Soaps.com, “I sought this gig out because after every NY soap was canceled, where’s a TV villain supposed to turn besides a swinging 60’s playboy? As a Jersey boy, I have wanted to work at Paper Mill since I was a kid, but be careful what you wish for! We open tomorrow and after 3 weeks of rehearsal… I am still working on my damn lines. As a lead I’m onstage almost the entire time – an honor and a privilege, yes, but man, what a challenge! I could memorize a 50 page scene with Kassie [DePaiva, ex-Blair “OLTL”] in half-an-hour, but this French farce business is like a house of cards – one wrong word and the whole thing collapses. That said I’m in heaven with the absolute best in the business on-stage and off. I really hope they have me back.”

Aside from his Llanview role, Matt appeared on “Guiding Light” (ex-Dalton Reid, 2008), “All My Children” (ex-Terry ‘T’ McDermott, 2006), “Royal Pains” (Dennis ‘DB’ Brown), Onion SportsDome (Alex Reiser) and can be recognized as ‘The Mike’ in past Old Navy commercials.

Find out about another former Llanview actor through Nic Robuck To Ringer.

Please Note: Our “One Life To Live” section will remain open. We’ll still be here delivering news on the actors, Llanview fan fiction and various articles about the show.