Live Blogging: The View’s One Life To Live Tribute Episode 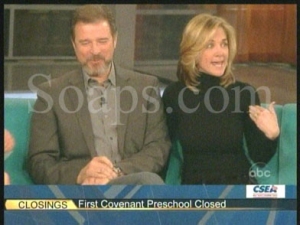 In case you missed it…

During today’s special episode, with Erika Slezak (Viki) co-hosting, she shares how she was cast on “One Life To Live” while trying out for “All My Children.” Some of Viki’s most memorable moments are shown. Agnes Nixon (show creator) admits Erika was one of a few actresses chosen to play Viki. Whoopi Goldberg states, “I pity the fool who took “One Life To Live” off the air!”

Via video, Nathan Fillion (ex-Joey, 1994 – 2007) chimes in to say he thinks of his former cast often and fondly and is grateful he was part of the “One Life To Live” family.

Robin Strasser (Dorian) arrives and shouts, “Yes, I brought Dorian with me! If this is the last time I can dress as Dorian, I’m making it count!” Talk of past storylines and her character’s affair with Nathan Fillion have her saying, “I would do it again for free.” Robin and Erika praise each others’ acting skills. Robin admits she’ll miss Erika and the clothes the most!

Jerry verDorn (Clint) joins the ladies and laughs about being put in between them throughout the years. When recast in the role, Jerry tried not to act like Clint Ritchie but rather like Asa Buchanan.

Robert S. Woods (Bo) and Hillary B. Smith (Nora) turn up. Robert screen tested with Erika during his very first test. Erika actually went to the producers and said how cute and awesome Robert was. Scenes from Bo and Nora’s wedding with Little Richard are shown. Hillary cries as she shows everyone the rubber chicken Robert gave her during the last day of filming. He used to terrorize her and Phil Carey (Asa) with it!

Kassie and James DePavia (Blair and Max) arrive and admit they owe their marriage to the show! They met in a bar and Kassie thought he was a jerk. When they reunited on the show, Kassie was scolded for playing too much chemistry with James! They've now been married for almost 16 years. Over talk of their storylines, Kassie refers to Blair as an aging slut!

Andrea Evans (Tina), one of Max's many women, appears for bit and talks about Tina's love story with Cord.

After 28 years, Judith Light hits the stage and hugs Erika! She admits she vowed never to do a soap opera. Later, down and out, Judith got the role of Karen Wolek and gained a new found respect for Daytime actors. She met her husband Robert Desiderio (ex-Steve Piermont) onset. She actually left the show due to him persuading her to try to make it big in Hollywood. And she did on "Who's The Boss!"

Wrapping up the special, Whoopi reminds everyone to watch today's finale and says, "It's your life to live." Tell us where will plan to watch the One Life To Live Finale.

Here's a bit from the episode:

Join us on Twitter @soapoperafan, and Facebook. Come tweet and Facebook with us about "One Life To Live," all the other soap operas, "Dirty Soap," "Glee," "Grey’s Anatomy," "Vampire Diaries" and "Venice The Series."