Amy’s One Life in a Week!

As I stated last week, I'm not a big fan of the 1968 storyline. With that being said, this week's turn of events has had me lifting one foot on the bandwagon with the way the show is presenting us with the ramifications of what changing the past could do to the future. Seeing David stunned by the empty reflection in the mirror has done a few things for me. One, bringing the past into the present. Two, making David doubt not only his eyes but his sanity as well, especially after being married to Addie! I also need to interject here that I love what the show has done to Addie's character! And how about David donating little David Vickers to St. Ann's - very charitable indeed - only then to have Tina pay five bucks to get her beloved companion back! The minute Tina showed up at Llanfair I could tell that she's going to give Tess a run for her money!

Now everyone, I must ask you to join me for a little game of "I See." Looking at the picture above, where David supposedly can't see his reflective... "I see a black..." A black shoulder behind the woman in the photo! Could it be David's reflection? Boy, I snapped that screenshot just right!

Speaking of 1968, when Brody intercepted Rex's phone call from the past to Gigi in the present, did anyone else notice any details on Gigi's cell phone besides the screen reading "Rex calling?" Call me a stickler for details but I can tell you the girl sports a Motorola, with a complete charge and a full line of bars from inside Rodie's! See for yourself in the header picture above!

Many have wondered if Tobias (Vincent) had left the show. Although ABC had told me that the actor is still on recurring contract I have to wonder what this sudden, totally out of the blue, cheating on Layla has to say for things. As it was, the last time we saw Vincent was on May 16, 2008, and now this… All this time he's been off cheating on Layla? I for one hope Llanview holds more for Vincent, as he has the makings to be the next RJ Gannon!

Clint to Natalie after finding out that Jared had also been invited to Viki's going away party. "Maybe we can play charades since Jared is so good at them." 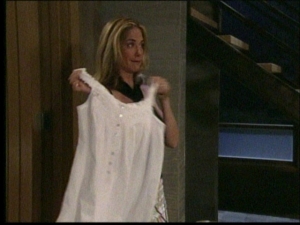 Welcome back for another Friday installment of Amy’s “One Life in a Week!” Although I found this week to be a huge carryover from last, we were treated to a few surprises, departures and… extra clothes in Blair’s shopping bag!

At first when Blair and Jack ran into Todd at the coffeehouse the tension was thick but I actually felt the two coming together after Todd admitted that what’s going on with his family is killing him. However, in total Todd fashion, just when it appeared that Blair was softening up, he said Blair – not Jack – was the one worried she’d be late for a sleepover, and it totally pulled Blair back into ‘scorned ex’ mode and had her snatching away her bags, and son, and taking off! Later, seeing that nightgown that Todd bought for Marty in her bag was classic – and totally not Blair’s wardrobe style, even though she did try it on for Todd’s bodyguard!

The tearjerker of the week definitely goes out to the scene surrounding Cole and Starr. Not only did Cole put everything he loves aside for the sake of his child, his portrayer, Brandon Buddy, did a remarkable job and filled the scene with so much emotion that I was crying through writing the recap myself!

I was sad to see Viki head off to find herself again, but in the same sense, and from past returns to Llanview, her departure left me wondering what she’ll bring back with her this time! I loved the look on her face when she was reunited with Tina again! I’m totally routing for a Charlie/Viki reunion and am very happy to see Jared and his father start to overcome the past with hopes of a future relationship.

While I did hurt for Antonio and Talia during their painful goodbye, knowing the character of Antonio like we do, I have no doubt in my mind that he will return for Talia – if she doesn’t find her way back to him, and Llanview, first! Question is will she take out Carlo or leave the pleasure to Antonio – or Cris, who definitely owes the man some payback! Since I receive show spoilers way in advance, seeing Sarah alive was no surprise to me, but I was so happy for Cris – who hasn’t had the best of luck in the women department. Lord knows why, the man is hot and a charmer to boot!

Even though John knows Bo is the best man for the job, I love the idea of John as acting commissioner! 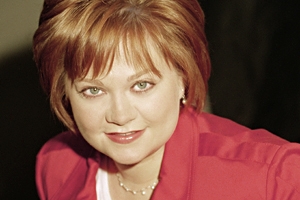 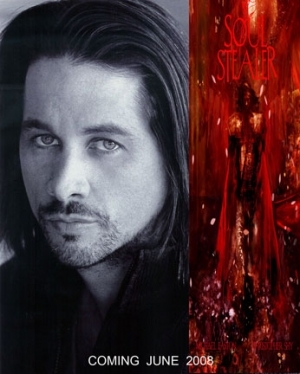