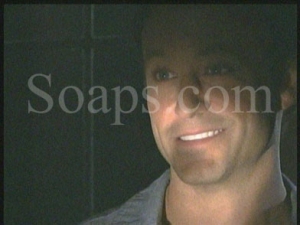 The days are closing in and we only have one more week in Llanview. This week, though another short one, was like twenty Friday cliffhangers in each episode. Many returned and brought out the fear in a few residents. The prison break storyline was a brilliant, combustible, edge-of-your-seat way to execute such fear and bring back characters we loved to hate. Let’s take a look…

“I missed you, Nora.”
Troy has always been able to lay the creepiness on thick and leave it to Nora to try to calm the man with wine and empty promises. Soaps.com poster “Lucetta” made a good point, “Yeah, Troy is loony, wearing his prison uniform and telling Nora he is off for good behavior.” Troy was once a likeable character who turned into quite the villain, just another example of how the good go bad in Llanview. Nora had guts to try to reason with him by admitting her love for Bo would never die. Bo rushing in to save Nora with Lindsay’s help, of all people, was a testament to how a frenemy will surprise you when you least expect it. Though we don’t know if Troy will pull through and save Bo, we can pretty much bet Lindsay isn’t as rehabilitated as she seems. She’s probably bypassed Cherryvale by now… On the other hand, maybe they knew Lindsay would flee all along.

Allison’s secret.
Allison has been carrying around this secret about Natalie and Jessica for years. To tease us with it again was downright annoying. “LeaveNatalone” questioned, “What is Allison talking about? Are they trying to bring that storyline up again? Is it just me but does someone remember a few years back when Allison was hinting to Jessica and Natalie about some secret about them?” You’re right. Back in 2008 Allison returned, throwing her big secret in everyone’s face, until she landed in a coma. Why should we believe she’s telling the truth now? Let’s see… Are Jessica and Natalie both Clint’s? Are they Mitch’s? Are they Viki’s? Are they Allison’s? Or is Allison still as full of crap as she ever was. We may never know…

Heed the Messenger.
Roscoe Born knocked it out of the park. Props to Melissa Archer for enduring all of Mitch's extreme hair pulling! We've always been able to count on realistic scenes when these two are thrown together. Mitch's jab about killing Jared brought all of the old memories back. Clearly Natalie's buried fury enabled her to give it back to Mitch tenfold. Props to Jessica for risking her life to save Natalie's - and for spitting in Mitch's face. It was so Tess-like! And John... my hero! No only did he save Natalie, he laid one hell of a kiss on her afterward. If one of Llanview's biggest villains had to be shot for Jolie fans to get that, so be it!

NuCole.
What could've been such an emotional time for 'Sole' fans was tainted by the Cole recast. Nothing against Van Hughes, he did a great job filling in and looking the part, but considering the popularity of this couple, and the kiss they shared on Wednesday, it would've been better suited to have some type of off-screen encounter between Starr and Cole rather than bringing a recast into the mix. Twitter pal "bluejayseh" stated, "Agree about Brandon Buddy. It's definitely not the same!" Brandon Buddy taped a few scenes then couldn't commit for personal reasons. Why not just air those scenes then fudge the rest by not showing his entire face? Van looks a bit like Brandon. Cole could've lured crazy Hannah outside and away from everyone with his voice, which could've been tweaked and disguised. He still could've been shot and been in emotional scenes with Starr until the end, with only part of his face shown. Just one more nail in the emotional coffin… However, for some, all was not lost as "piqueroi" stated, "I liked the new Cole. The words coming out of his lips were very heartfelt. If the show were not ending, I think I'd be very satisfied with the recast." If the show had migrated online the recast could've grown on viewers. Agreed - no matter who played Cole, I cried my eyes out today when Starr was praying through song.

Deputy Sam.
One thing I will miss so much is watching little Sam. I can't remember the last time a child actor had me hook, line and sinker. It'd be a shame if one of the other soaps didn't snatch him up.

The final week…
Who was your favorite One Life To Live returning character and who will die? Bo, Cole, Viki, Clint, Mitch or Ford? There are a few more fan favorites set to appear next week for the show's final episodes. Just saying those last two words brings the emotions piling down upon me. It's going to be a hard week to swallow, but we encourage all Llanview fans to enjoy the ride until the very end. Again, we owe that to the actors and everyone behind the scenes.

I'll see you back here next Friday for my final "One Life In A Week."