Amy’s One Life in a Week! 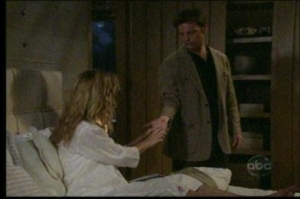 Well, we’ve made it through another week in Llanview – even with a big chuck of the characters in Texas, disguised as other people, in 1968 no less! I want to thank all of my One Life to Live posters for giving their daily thoughts on our message boards and under the recaps each day, and I thought it was time that I gave you my thoughts for some of the past week’s drama in the form of Amy’s “One Life in a Week!”

As my recap title stated for Monday’s show, “Can You Say… Hot!” I have to admit, I’ve been hoping for a very long time for a John and Blair hook-up! Not as the show’s newest couple, but just simply a hook-up! Both characters have always been hot between the sheets with their flavor of the moment, but I must say… Although the show gave us a teaser of how hot they could be, through that first kiss in the rain, they never gave us a full peek into their love scene, which I feel was a big let down. In the end, I’m still hoping that Blair and John will remember the old saying ‘Friends with Benefits’ and play ‘that card’ once in a while! However, the whole scene wasn’t a bust – Todd did get to find out that Blair and John spent the night together!

Speaking of Todd… Oh, Todd, what the heck are you doing? Dare I say… I think what started out as a way to hold some leverage over Cole, by using Marty as his major pawn, is now evolving into… not only a cleansing of the soul, if you will, by using round about confessions to ease his guilt, but love? Is Todd falling in love with the one woman who he hated the most? One thing’s for sure, Todd is weaving himself into one heck of a web, not only filled with lies, but intertwined with his emotions as well – something Todd has always held deep inside of him! I’m enjoying watching this rather unconventional storyline and can’t wait to see how it plays out! No matter what’s going on with these two adults, I personally want their children, Starr and Cole, to raise their baby together. They have enough family support to do this – even at such a young age.

Over the years I've loved watching David Vickers scam half of Llanview, but I'm very happy to see this character finally having a conscience - in the name of his friendship with Viki Davidson. And she wasn't even one of his past sugar mamas! Kudos to the show for adding this new trait to David while not taking away any of the classic characteristics that have made him one of the hottest, funniest scammers in daytime - one we never manage to hate! And with a cute chick magnet now by his side, little David Vickers the dog, David is sure to have no trouble scamming his next victim! Personally, that's one victim role I wouldn't mind playing!

Still morning over the death of Nash myself, I'm enjoying Tess's return immensely and am just waiting for the next shoe to drop! Does this mean I agree with her drastic tactics to seek revenge on Jared and Natalie for their indirect part in Nash's death? No, but I'd be lying if I didn't say that I think Tess is doing a fabulous job at keeping Llanfair on its toes through this feisty, unpredictable character. The only thing I ask, Tess, is that you take care of Jessica and Nash's baby and keep the stress levels to a minimum!

Okay, I do have moments when I wish I could go back through time, but since I was born in the early seventies, I never thought it would be possible for me to go back to… 1968?! While I enjoyed the two anniversary special episodes, where anything could have happened without being questioned, I'm not really digging the carryover of the Bo and Rex 'stuck in the past' charade. I almost need notecards to keep up with who's playing who, but like a true fan I'll wait it out till the end - with hopes that all the time traveling will lead to some big revelation, preferably one that takes place in 2008! Hopefully the truth about Shane will come out, so Rex, Gigi and their son can finally come together as a family - and so poor Brody can move on with his life!

Do you want a ride across the world? Wait now longer as I jump on my magic carpet and head over to Mendorra - a place where Kings and Queens are scam artists in disguise, young couples are sent over waterfalls, and mob bosses are still arranging marriages! Okay, so I got a little carried away, but in all reality, I think this storyline is as well. Although I realize it's another carry-over from the anniversary special, I think bringing Carlo Hesser back to Llanview would have left for a ton more drama. Yeah, I know what you're thinking… He would be thrown in jail for sure then. True - but he's always managed to escape in the past, and a fixed marriage in Llanview would have been to die for! Literally!

To close out my thoughts for this week, I present you with the week's funniest quote…

Todd to John, "You better have Blair checked out before you get a STD!"

Stay tuned, as I'll bring you a new installment of Amy's "One Life in a Week" every Friday! I hope you enjoyed my thoughts, and whether you agree or disagree, I welcome yours as well below!