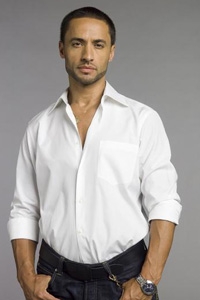 We all know him as the hot, sexy detective Antonio Vega on One Life to Live, but fans may not know that his portrayer, Kamar de los Reyes, is attending the 2009 Soap Cruise!

Kamar called me bright and early this morning to chat about the cruise, but I had to immediately congratulate him on his recent Alma Award Nomination. When talking about how Kamar found out that he’d been nominated, and how he felt that his co-star and onscreen brother, David Fumero (Cris Vega) was nominated as well, Kamar said, “I got a phone call from my manager. I had no idea I was going to be nominated and was extremely flattered. Sometimes, unfortunately, I feel that some of us, most of the actors on One Life to Live, don’t get the proper recognition. David and I have worked our butts off. I’m excited for us, and for ABC, and am glad to be involved with such a great group.”

On to the topic at hand, Kamar is very excited about attending next year’s 2009 Soap Cruise and couldn’t say enough about what he’s most looking forward to. “My favorite thing about being a ‘quote unquote’ soap star is being able to interact one on one with my fans. More than doing talk shows, even the parade at Super Soap Weekend, I love signing autographs, looking my fans in the eye, and getting to know them on a personal level.”

Some of you may not know this but Kamar is married to his one-time onscreen love, actress Sherri Saum (Keri Reynolds), who was lying in bed with Kamar during our interview, so I had to ask if he planned to bring Sherri on the cruise. “God, I hope so!” Kamar laughed. “I want her to be there by my side, and me by hers. It’s up to her – if she’s free.”

With the cruise docking in the Florida Keys, and with so many attractions at everyone’s disposal, I wondered if Kamar had any plans during this time, to which he humbly replied, “I don’t. I’m going to play it by ear. My number one priority is to spend time with my fans – so maybe I’ll do something with the fans!” Although Kamar has been to Mexico, he’s never visited Cozumel, or Key West, and is very much looking forward to it!

We’ve all seen Kamar exhibit his dancing skills on and off the show, and I thought it would be a real treat for fans if they could catch of glimpse of his moves while on the cruise, so when asking Kamar if this was a possibility, he said, “I don’t see why not! Cameron Mathison (AMC’s Ryan) will be there, so maybe he can show me some moves!”

Soaps.com can’t wait to see Kamar on the cruise, as our Editor-In-Chief, Christine Fix, will be attending again this year! Stay tuned, as I’ll soon be bringing you the second half of my interview where Kamar answers some fan questions from our One Life to Live Soaps.com readers!

One Life to Live's Tika Sumpter's...

A Martinez Coming to One Life to...