One Life To Live: More Returns For 40th Anniversary Episodes! 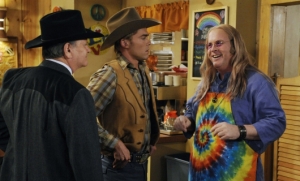 Even though the show celebrated its 40th Anniversary on July 15, 2008, One Life to Live is hyping up the fans in anticipation of its special upcoming anniversary episodes with the announcement of more returns!

In addition to those who have already been reported to return, Erin Torpey (as Jessica’s deceased daughter Megan, ex-Jessica), Phil Carey (Asa), Mark Derwin (Ben), Stephen Markle (Mel), John Loprieno (Cord) and Agnes Nixon (OLTL creator), fan favorite January LaVoy (Noelle) will actually make her first appearance today, July 16, 2008 during a scene with Rex that will led up to the big storyline special surrounding Rex and Bo! John Rue (Moe) will show up for the fun, as well as R. Brandon Johnson (Chuck) when Rex and Bo’s travels bring them back to Paris, Texas! In fact, look for ‘Chuck’ to appear starting on Wednesday, July 16, 2008. Be sure to watch Friday’s show – as it’s sure to be a real cliffhanger!

Then, come Monday and Tuesday, July 21 and 22, 2008, get ready to watch the show as some travel back through time, one heads to the big palace in the sky and while others watch as a loved one’s life is about to fall off the face of the… Okay, sorry, I better stop there before I reveal too much!

Soaps.com can’t wait to watch and recap the specials next week for our readers! Be sure to stop by the One Life to Live Message Board to let us know what you thought of the big celebratory episodes!