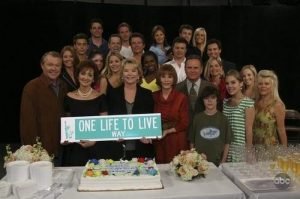 Every day brings new drama and every year brings the fans some very memorable storylines. On July 15, 2008, ABC’s One Life to Live celebrates their 40th Anniversary – as well as forty years with the same network – and we couldn’t be more proud of the soap that has become such a big part of so many fans’ daytime lives!

Created by Agnes Nixon, throughout the years, we have followed such families as the Buchanans, the Lords, the Siegels, the Rileys and the Woleks as they’ve traveled down the paths of deceit, intertwined themselves through love affairs and have even pulled together during times of need. Each fan, young or old has their favorite characters who they’ve loved or loved to hate and with every year that ticks by we are reminded of those who have either left the notorious town of Llanview or have been killed off the canvas through fabulous storylines that keep us on the edge of our seats daily!

Not only is this a year to celebrate the show’s presence in the daytime lineup today, One Life to Live took home a few Emmys to be proud of as well – Emmy awards that only verify that its cast, crew and everyone behind the scenes of the show are committed to bringing their fans everything we could ever want in a soap opera with hints of hidden onscreen promises for what is yet to come!

So on behalf of everyone here at Soaps.com, and the fans who visit us daily to stay up-to-date on everything “Llanview related,” we salute you, One Life to Live! Congratulates on your 40th Anniversary! We can’t wait to see what you have in store for your big upcoming Anniversary episodes – set to air on July 21 and 22, 2008!

For fun, we invite fans to post their congrats below, along with their favorite storylines that have appeared throughout these forty years!