One Life to Live’s Robert S. Woods and Erika Slezak on The View! 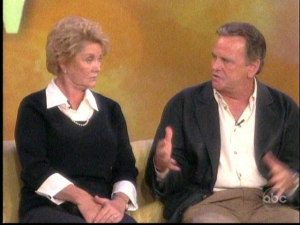 It seems many One Life to Live actors have made a pit stop in the ABC studios of The View as of late. Last May we watched as Kristen Alderson and Brandon Buddy appeared to talk about their onscreen love affair and young pregnancy between Cole and Starr, and most recently, last Friday, Andrea Evans talked about why she really left the show back in 1990.

Although we know both actors will be involved in some neat storylines during the anniversary episodes, set to air on July 21 and 22, 2008, one can only hope that they’ll give us a sneak peek into their thoughts surrounding the special guests set to return to the show to join in on the fun as well!

Soaps.com will be watching Robert and Erika’s View appearance, so check back here on Wednesday, as we’ll be adding some live screen shots from the show!