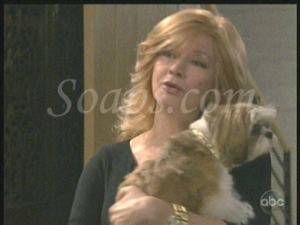 Big returns lit up the week, not to mention the bomb that was meant to kill those closest to Todd, and the level of cuteness skyrocketed when David Vickers the dog appeared and peed on Blair’s leg. Let’s take a look…

Tea to the rescue – again.
Tea defending Todd is classic “One Life To Live.” They’ve never really worked as a couple, due to Todd’s past verbal and physical abuse. Tea always forgave him and went back for more violence, which made her otherwise strong character appear pitiful and made them one of Daytime’s most toxic couples. Tea is a damn good attorney and seeing these two characters pushed together this way is going to be exciting to watch. I only pray Tea doesn’t fall back in love with the man accused of killing her husband and of degrading her for five million dollars.

“How about a kiss for your grandmother?”
Irene is about as wacky as the man who impregnated her years ago. Victor Lord. She used to be Viki’s best friend and suddenly we’re to believe she resented her all these years. I guess it’s not too farfetched, considering Dorian has too. Maybe someone from the agency muddled up Irene’s brain somewhere along the way. I’m not sure what kind of information was on the microchip, or what type of bargaining Irene planned to do with it, but she did inherit everything of Victor’s so all is not lost. Many wonder how this could be… May I remind that this woman hid Victor, kidnapped Todd in later years, and gave Victor a new face, as well as Todd’s place in the world. I think it’s safe to say Irene has the means to fix a will. How appropriate was it that Tina returned, hoping her brother, who she never really had a relationship with, had left her a piece of the Lord fortune? I’ve never really been a ‘Tina in later years’ fan, so it was nice she brought little David Vickers the dog back to make her return a bit less painful. She’s so damn cute!

Another classic touch on Llanview history.
Todd’s amazement that there was such a thing as invisible ink was priceless. Being locked up for eight years tends to keep one out of the loop. Starr breaking Todd out of jail reflected on not only their relationship but on the Starr we all grew to love. It was nice seeing her risky side reemerge, even though she’ll be forced to face the consequences of her actions. Fun stuff! Then there’s Jack… He seemed to take two steps forward by almost confessing the truth to Blair just to take five steps back when he called the cops to report Todd’s whereabouts after his escape. This kid has some serious issues that are going to cost him at some point if he doesn’t straighten up.

Defending the son he claims to hate.
Welcome home, Cord! What a sight for sore eyes. He has every right to be concerned about what will result due to Rex's actions where Buchanan Enterprises is concerned, but hallelujah… Clint did the fatherly thing and stood up for his estranged son. I didn't think there was a possibility that Clint and Rex could feel something for each other let alone have a relationship, but things appear to be looking up. Would you like to see Clint and Rex have a better relationship? Vote in my Poll: Clint And Rex to let me know. Cord and Tina's interactions, meh… Been there, done that. Frankly, the Tina of today doesn't deserve Cord.

Shane the murderer?
Okay, so it's continuing to look as though Shane killed Victor. I'm still hoping that Brody came upon him and did the deed himself. We know Rex's gun was fired. Was it fired recently? Did Shane hide it from Brody then put it back in the safe? Or, did Shane really kill Victor? I'm enjoying the mystery!

Sample my wiener.
I thoroughly enjoyed Tuesday's scenes with Jessica and Ford, all dolled up in his wiener suit. The dialogue was to die for and the sexual tension between them was on fire. When these two finally give in to it, they'll be no stopping the explosive feelings that they've so desperately tried to hide.

Hit and miss.
How many times can I say how sick to death I am of all of these hit and miss instances between John and Natalie? It gets a bit repetitious, like the writing in this storyline. I don't blame Jessica for being upset. Sure, things happen, but considering Natalie is marrying Brody for security rather than love, bottom line she's betraying her sister in a big way by even accepting his proposal. Jessica finding Liam's paternity results in David Vickers' dog carrier is going to leave her with quite the predicament. She'll have to decide if she wants to allow Natalie to be happy or if she wants to make Brody miserable by exposing the truth. I'll spare you anymore of my analysis. It'll just be more of the same. John said, "End of story." I say end the story.