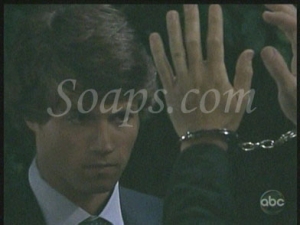 This week was all about trying to prove innocence, keeping a secret hidden, and sacrificing one’s dreams by putting all of their hope and trust in a couple of losers. This is Llanview after all, and I wouldn’t expect anything less. Making sense of everything is another story, so on with my blog…

Lies in exchange for justice.
They may help in the beginning, but the truth normally always prevails. We know Jack’s been lying about his eye-witness account, and it was interesting hearing Shane admit it too. I don’t think Shane killed Victor, as it’s starting to appear. Maybe Shane was dreaming today, dreaming of hitting Jack over the head. Maybe he did go and confront Victor with a gun, only to have Brody appear and stop him. I’m leaning toward the theory that Shane witnessed the murder, and I could even accept it if Brody turns out to be the killer. It would align the facts up nicely and explain why Shane doesn’t feel too broken up about staying quiet. After all, Shane went to Brody for help in getting justice for his mother, and Brody promised to do just that. Throwing in Tea’s suspicions over Jack’s claims, and the fact that Blair’s digging deeper for the truth, is sure to put a damper on Brody’s otherwise relaxed demeanor. He’s appearing much too pleased about how the murder mystery is panning out. Here again, like Shane, he’d also be an obvious choice as the killer. I’d rather it be someone we know, someone the writers could play off of to further and create storylines to come. Having one of Irene’s minions as the culprit, well, that’d be just boring. Now, the question remains, should Tea help Todd prove his innocence, or do you have a feeling he really killed his brother? Vote in my Poll: Tea’s Help to let me know. I liked the interaction between Dani and Todd… the tender way he appealed to her loss and the way Dani seems to be almost subconsciously willing to accept that Todd’s her father. I can see these two having a strong relationship down the road.

“That was a close one, Stacy.”
The only reason I can think of as to why Cutter was shocked to see Stacy, and why Kim doesn’t want anyone else to see her, is because Kim had Stacy’s face surgically reconstructed to look like Gigi. I have no idea why the hell Kim would do that or why she would be worried about who was inside Gigi’s coffin. Unless Kim has Houdini’s ghost in her back pocket, and Gigi’s the one who’s really in that bed, why would Kim give Stacy Gigi’s face? Fun stuff though!

Silly, silly girl.
Did Starr not learn anything from Nate, Deanna and the public display of "Hold The Diploma?" If the recording label was dumb enough to hire Rick to handle their new talent, it's obvious that the label is a bit shady itself. It's strange that Starr feels as though this is her only shot at making it into the music industry. Did she forget her family is rich? Oh, I'm sure her response would be, "I want to make it on my own." With all the facts surrounding Rick's persona, Starr should definitely take the easy road on this one and look to those closest to her to guide her in the correct direction. Blair's a singer, Viki's a savvy businesswoman, Dorian's heavy into politics… Come on, one of these people must know someone who knows someone else in the industry who's better than Rick. Bad music reviews are going to be the least of Starr's problems. On a side note, I couldn't be happier that Baz is heading off to Paris. I hope he stays gone. This character has been nothing but rude since he arrived in town with not a whole lot to offer.

Life's too short.
Yes, it is, so I wish Brody would buck up, be a man and confess the truth about Liam. Watching him propose to Natalie was enough to make me gag. I don't want Brody with Natalie and by the looks of it Natalie doesn't truly want that either. She only agreed to marry Brody because she thinks John doesn't love her anymore. Brody wants a family. He always has and is in love with the idea of having one with Natalie. The character's been ruined, and if Brody isn't redeemed soon, I can't see myself ever rooting for this tortured soul again.

"We talked about this, Roxy. No planking on the bar."
Funniest moment of the week had to be John finding Roxy with her legs in the air, as she was lying on the bar, face-down, reaching to grab a bottle of booze in order to serve herself. Not only did she succeed, she poured herself a glass then left the bottle nearby, handy for when she was ready for a refill. Gotta love how at home she feels in Johnny's bar. On a serious note, watching Natalie overhear John claim not to love her anymore reminded me of the mixed signals exchanged back when he was dating Marty and really wanting to be with Natalie, which is the reason she slept with Brody to begin with. I want this madness to end pronto.

One Life To Live's John Loprieno And...