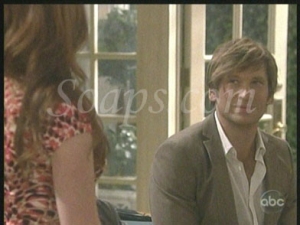 Rodent infestation at the diner. (Soaps.com)

This week had people catching up, meeting for the first time, and saying one last goodbye. It was an emotional week to say the least, and if you haven’t watched the cast saying goodbye to one of their longtime friends view the Video Message: Goodbye Trevor St. John. Now on with the blog…

“How’s my fiancé-stealing niece?”
The ongoing interactions with Todd and those from his past are fun to watch. He and Natalie have never been close, but their conversation on Monday gave Todd a bit more insight into what’s been going on in Jack’s life, maybe more than he bargained for. I liked their back and forth jabs and the fact that Natalie didn’t rub it in Todd’s face when he already felt down in the dumps for the trauma caused in his absence. Being a mother has really given Natalie a new perspective on how things aren’t all black and white. Todd’s always been about his family. Though he’s made mistakes in the way he’s handled them in the past, his new sensitivity level toward his children and Blair is evolving the character in a welcomed positive light. When he pulled Blair into his arms, before Jack walked in and lashed out at him, it was as if Todd and Blair were back in that ballroom with gold balloons pouring down around them. I’m all for a Todd/Blair reunion at some point and don’t think Tomas can hold a candle to their history or what they could make out of a future together.

Goodbye Victor Lord.
Trevor St. John’s castmates said goodbye to their co-star, and we were forced to as well. Disappointment filled my office when Victor wasn’t shown during his funeral. Fans weren’t able to get closure and will always remember last seeing this Daytime vet lying on the floor of the Manning Estate murdered. What a letdown – unless Prospect Park can lure Trevor back and resurrect the character. I’d like the chance to get to know Victor through his new namesake. I guess not all was lost… Jack got what he wanted after the new Llanview mayor ordered an arrest. It’ll be interesting to watch how Jack’s emotions play out when he realizes Todd didn’t kill Victor. Todd has admitted that Victor was a father to Jack and sympathizes with Jack’s grief. He’s even taken some of the blame for how Jack’s turned out. Jack just needs to understand that Todd is his father, a man who loves him.

Visit to Statesville.
Speaking of letdowns… If there was one thing that could have made this baby storyline a bit interesting it would’ve been seeing Greg give Destiny advice. Here again, fans were robbed of what could’ve been an emotional scene and tribute to the show’s run on ABC, before it migrates online, by bringing back a past character, Greg Evans.

Don’t peek at the vacation photos.
At least one Evans brother has been seeing the light of day. Shaun’s been appearing in more and more scenes and adds little comedic touches along the way. You’d think listening to Victor being shot wouldn’t give anyone a reason to chuckle, yet I did when Shaun warned John not to peek at his and Vivian’s vacation photos on his cell while keeping it as evidence. Shaun’s photos are safe with John… Somehow I can’t picture John locking his office door and taking an unofficial cruise around Shaun’s media files.

Morris' hidey-ho.
Cutter sitting in the diner talking to Morris was a bit over the top. What he and Kristine found inside the popular porcupine, that's another story. The gun was just enough to make Cutter shift back over to the dark side, despite Kristine wanting to do the right thing. And with Kim thrown into the mix, Echo's going to get a run for her money - or Rex's Buchanan money. Find out what the actress who plays Echo had to say about her new book, Llanview moving online and Brian Frons through Candi's Kim Zimmer Interview.

Visions of you.
Seeing Gigi reappear only reminds me of how much I miss the character and hate that the show never gave her more of a storyline toward the end. Do you have an idea of what Gigi is trying to relay to Rex? Let me know through my Poll: Visions Of Gigi. It must have to do with whoever is in that special care facility. Kim made a point to tell Kristine that her plastic surgeon was female... I'm not sure how that fits in, if at all, and Kim's nervousness at the exhumation of Gigi's grave still has me stumped. All in all, I'm intrigued by everything surrounding it. It's a nice change, considering the spoilers so often take away from the climax of such storylines.

Rockstar in Llanview?
Though I'm not keen on this musical storyline surrounding Starr, Rick and Baz, the show does have a treat in store for viewers. If you haven't heard check out Kristin Alderson's One Life To Live Music Video. I can't imagine Rick pulling off anything worthwhile, and Baz is basically putting all of his eggs in Rick's basket, so let's hope the music department pulls through because this storyline contributes nothing but filler scenes.