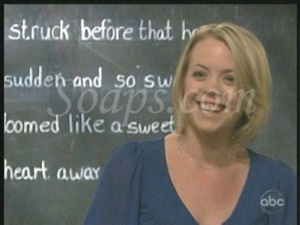 It was a short week in Llanview, but the murder mystery was in full swing with a lot of guilty suspects walking around town and some new revelations that could hold the key to who really killed Victor. We were also treated to a familiar face from the past, but were you happy with how the return was executed? Let’s take a look…

First love.
It was nice to see Erin Torpey’s cameo appearance and longtime fans may have noticed that little spark between Cris and her character, considering she played Jessica during the time when Cris found his ‘first love’ in her. We’re to assume Thursday was David Fumero’s last scene and with the show ending its ABC run in January, then continuing online, I can see the importance of bringing back show vets to celebrate their part in its forty-three year television run. What did you think about Erin’s cameo? Let me know through my Poll: Erin Torpey’s Return. It was fun watching Cris and Jessica test the ‘old waters’, but it’s best to keep her in Llanview to deal with her mess of a life, which includes her suppressed feelings for Ford.

The Ugly Duckling.
Between Todd turning out to be Victor, T.M. resurfacing as the real Todd Manning, and Kim staking her claim on her real identity, Aubrey Wentworth, I’ve spent a lot of time in our “One Life To Live” cast list tweaking details to reflect these changes. I like the spin that Kim and Cutter are siblings and that our beautiful Kim used to be an “ugly duckling.” It’s safe to say Kim has a plastic surgeon hidden in her G-string, but I’m still not convinced Stacy is the one in that bed. It makes no sense to hide her away. I look forward to Kristine and Kim’s interaction next week, as well as Cutter finding Rex’s gun in Morris’ hidey-ho.

Murder with a capital T.
Speaking of which… Tea thinks Victor tried to sound off with a T. If Victor was trying to reveal his killer, Todd and Tomas are the obvious Ts. As I stated last week… The person who shot Victor clearly surprised him. Could it be Tina with a T startled him and killed her own brother in cold-blood? She is returning, so it could come into play that she's somehow connected to the whole crazy agency, brainwashing mess. I feel for each of the Manning kids, as well as little Sam who is Victor's only child. The look in that little boy's eyes when Blair confirmed Jack's cruel outburst about Victor's death broke my heart. To be fair, Jack's lashing out at everyone because Victor has been the only father he remembers. The kid is hurting. He reminds me of Victor and Todd, who both have used vengeance as a way to deal with their emotions. Starr feels the pain of losing Victor but at the same time is comforted by the return of Todd. It's very realistic. Poor Dani, just when she accepted Victor, and his Todd Manning past, she'll be forced to look at Todd and the challenge of forgetting part of that same past all over again.

9 mm, the gun of choice?
How convenient that the gun used to kill Victor was a 9 mm. John's right, it's a very common gun. Hell, I even have a permit for and carry one. Maybe this type of distraction is what Brody was hoping for, if he killed Victor. Why had Rex's gun been fired when he clearly assured Echo it hadn't been? Is Rex lying, or did Shane kill Victor? At this point, the only thing I know for sure is that my 9 mm wasn't used to do the deed.

Actors making the journey online.
Prospect Park announced the first group of One Life To Live actors migrating online. With some of these vets onboard, my level of 'how the hell are they going to transition this' just dropped down a few notches. Check out the link to see who has already signed on. Some of the vets appear to have faith that this can work and with the company already purchasing the sets and wardrobe in its entirety, I'm optimistic that this journey will be a very productive and exciting one.