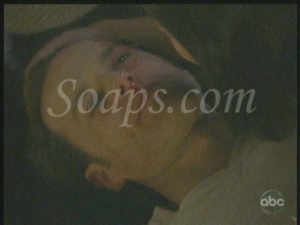 Disruption at the diner. (Soaps.com)

Devastation ripped through Llanview this week and kicked off yet another whodunit storyline. With so many suspects, and emotions running high, we’re bound to be talking about this for quite some time. Let’s take a look…

R.I.P. Victor Lord Jr.
Watching the last of Trevor St. John’s scenes only reminded me of the imminent changes ahead. I would have liked it if there had been a way for Trevor to stay with the show. The list of suspects in his shooting is a mile long. Everyone appeared guilty after the fact. Brody, Rex, Todd and Tomas would be the obvious killers. However, Shane could’ve flipped his lid and did the deed. Irene most likely still has some cronies in her back pocket. One of them could’ve set it up to look as though someone else did it. Whoever killed Victor, it was clearly someone he was shocked to see and someone he knew. Marty, Patrick, Mitch, Allison… The list goes on and on. At this point, I’m not sure who to point the finger at. How about you? Let me know who you think killed Victor, or if you think there’s a chance he’s still alive [hell, anything’s possible], through my Poll: Who Shot Victor? Tea and Victor’s final scenes broke my heart. His last ‘I love you’ gave me chills and the sound of the body bag zipping closed made me slump over in my chair. Remember, this is Daytime, so I’m not discounting the fact that Victor could somehow be alive and return when we least expect him. Prospect Park appears to know a good thing when they see it [re: “AMC” and “OLTL”] so here’s hoping they somehow convince Trevor to return at some point once the show migrates online in 2012. Whether it be as Victor, the real-real Todd Manning, or Walker Laurence from the dead, I don’t care… just bring him back.

Squabbling sisters.
I almost wish Tess would return, create another basement cell and lock Natalie in it until the truth about Liam surfaces. Listening to Natalie and Jessica argue at every turn, as well as watch Brody fall further into desperation in order to keep the secret, makes my head spin. I don’t find any of it entertaining. I never thought I’d say this in a million years yet between Natalie, Brody and Jessica’s demeanor as of late… Team Jessica all the way. By the way, I wish Clint would keep his pie-hole shut. Jessica and Ryder could be happy in a relationship with Ford if she just gave him a solid chance.

First love.
Rama doled out a bit of advice about romance to Cris. Next week, the original Jessica, Erin Torpey, is returning. Since it’s promised that her character will have a big impact on someone’s life, I’d like to see her reappear as Jessica’s deceased daughter, Megan. It would be a neat touch. For those who don’t remember, Jessica lost the baby after being hit by Dorian’s car. Will Rappaport was Megan’s father, but she was conceived during a time when Jessica was feeling insecure over her boyfriend’s, Cris Vega, closeness with Rosanne Delgado. I’m not sure what kind of impact Megan could make other than to help Cris decide where he wants to go from here, considering David Fumero is set to leave the show very soon.

Baby tug of war.
Snore-fest. I couldn't care less if Destiny has this baby, who raises it or about any of the Buchanan/Evans obstacles being thrown at viewers throughout this pregnancy. I want nothing to do with any aspect of this storyline and at this point couldn't care less if Matthew ever returns to the canvas.

My girl.
It appears that Kim has Stacy holed up in that special care facility. Again, I find it too obvious and can't imagine why Kim would lie if Stacy were still alive. Stacy did a lot of nasty things, but in the end, she'd made peace with Gigi, fell in love with little Sierra Rose and just might have went on to have a great life. On top of that, Kim is Cutter's sister. I guess he's not CJ Roberts after all. Now that I think back, remember the prep school yearbook photo of the real Aubrey Wentworth? I can now see the resemblance.

I hope everyone has a safe and happy Labor Day weekend, and I'll see you back here next Friday for another week's worth of Amy's "One Life In A Week."