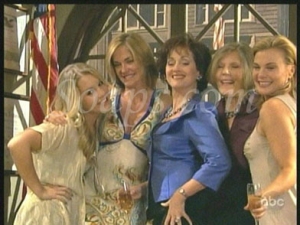 Who's been sleeping in that bed? (Soaps.com)

The theme of the week has to be exits. There has been no word yet on which actors will stay or who will go when the show migrates online in 2012. This week had some favorites leaving Llanview, and I can only hope that a few of them make a return next year. Let’s take a look at the losses, as well as the other drama that surrounded them…

A Llanview without Dorian and David.
It broke my heart to say goodbye to Dorian and David. I find it hard to believe that we’ll never see these two iconic characters in Daytime again, so here’s hoping they return one day. These exits are inevitable but still tough all the same. I’ll never forget all of the delicious drama caused by Dorian, how David’s classic comedic dialogue had me laughing with every word or Dorian and Viki’s ups and downs throughout the years that almost always left them on a frenemies playing field. Kelly and Joey are no real loss to me at this point, and I wasn’t heartbroken to hear Baz will soon be departing or that Deanna has already left for good.

Their love lives on…
Todd wasn’t the one who’s been there all these years by Tea’s side, the man she thought hurt her time and time again in the past. In fact, Victor has been the man who Tea reconnected and fell in love with, a man she still loves and can accept. Monday’s scenes were so touching. Though Victor has lost so much, I’m glad he didn’t lose Tea’s love. Unfortunately, with all the animosity lingering amongst many over the Todd reveal, not to mention all of the gun toting going on, I have a feeling we are in for another murder mystery. If Victor is the one who’s killed in cold-blood next week, there will be too many suspects to count and another whodunit debacle promised to suffocate out all of the other storylines.

Hidden away.
A new mystery unfolded when Kim paid a visit to someone in a special care facility. Considering Stacy's body was never found, and the fact that the boots Kim left by the pond after Stacy's supposed drowning walked off by themselves, I have to wonder if Gigi isn't leading Rex toward finding out that her sister is still alive. Who do you think Kim has stashed away? Let me know through my Poll: Kim's Secret Friend. This is Daytime, so there could be a chance Gigi is alive, as farfetched as it sounds considering her body appeared to still be in the gave, or that she has a twin. Whatever the case, I'm happy Kim's back. I always liked her with Clint. Somehow they're good together, and I can't wait to see who she's hiding.

Remembering Asa.
Asa, as well as the actor who portrayed him, has been a sadly missed presence in Llanview. It was nice to see his family pull together to remember him, and equally satisfying to see Rex put his hatred aside to give Clint time to do so. My heart warmed when Clint thanked Rex as his son. These two have a lot to work out and if at all possible, I wouldn't mind Clint and Rex developing a father/son relationship. It won't be as comical or happy as Bo and David's but could be interesting all the same.

A packed punch and a bag of frozen peas.
Jessica needs to stop being so damn defensive when Ford relates her to Tess because she's acting exactly like Tess, which is a good thing. I could never imagine the Jessica of old punching someone for kissing her, and I find this Jessica to be a character I can invest in again.

Can Jolie please get their just dues?
Speaking of character investments… I so want to be able to invest in John and Natalie again. This secret over Liam's paternity falls into one of the show's writing downfalls. Long drawn-out storylines are never good, as they force the fans to forget what or who they were fighting for and do nothing for the so-called climax that we're promised at the end. This is one storyline I want over now, yesterday, months ago, just please, Ron Carlivati, end this soon and bring this couple back together before the 2012 online migration date. If Brody has to lose his sanity in order to make it happen, so be it. He's another character who means nothing to me anymore and was ruined a long time ago.

Who is Kristine Karr?
We still don't know if Aubrey is related to anyone in Llanview, but here's a possibility to chew on. Could Aubrey be the daughter of Katrina Karr? Katrina was Karen Wolek's hooker friend. Karen switched Katrina's baby with her sister Jenny's, so it would appear Jenny's baby had lived. Years later, Jenny learned the truth and gave the baby back to Katrina. If it turns out Aubrey is the baby in question, I'm not sure I really care, considering none of the past players are currently with the show.

One Life To Live And Llanview Live...