Exclusive Interview With One Life to Live’s Kerry Butler! 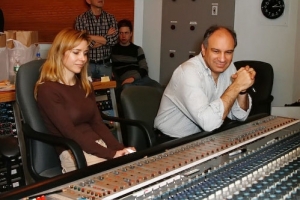 Coming off the recent announcement of the Tony Award nominations, Amy Mistretta took the time to ask Kerry where she was when she received news regarding her nomination and, of course, what her reaction was to be given such an honor. “I just finished doing the news to publicize the release of my CD when my friend Craig called me and said let me be the first to congratulate you, it was up on the web,” Kerry said. “I didn’t believe it at first, but then lots of people started calling! So it was very exciting!”

Kerry’s Broadway hit Xanadu got a nomination for best show as well as the choreography, and Kerry looked fabulous during the performances! Knowing it had to be fun to create her on stage role, we still wondered if a return to daytime would ever be a possibility for Kerry or if Broadway was something of a first love for her, to which Kerry admitted, “Broadway is definitely my first love. I have wanted to do this since I was a little girl. But I really love doing television too, and I think to be a working actress you have to do everything.” Kerry went on to explain the rewards of working in theatre verses television and said, “Well the audience gives you instant gratification, and you can feel them out and figure out what they like and don’t like immediately.”

Given that, we can now see where the phrase ‘The show must go on’ comes from. During Xanadu we asked Kerry if there was anything in particular that had everyone scrambling to push forward or if there were any funny bloopers she wanted to share. “Our leading man broke his leg in three places right before the press started coming to our show, and two weeks till opening. So they ended up replacing him, which was difficult. And then two other cast members broke bones and were out of the show, it was very scary.” Wow, that would be scary indeed! It’s a good thing the soaps don’t tape during a live audience! Speaking of Kerry’s old ‘daytime stomping grounds’ we knew there had to be a few things she’s missed since leaving the show… “I miss getting my hair and makeup done and wearing those amazing outfits! Claudia had very good taste,” Kerry said then talked about her old castmates. “I see people occasionally around, but haven’t gone back.”

Who could forget Claudia’s onscreen affair with Nash. With Claudia gone and Nash (Forbes March) on his way out of Llanview, Kerry commented on her former co-star’s exit, “I am totally surprised, this is the first I am hearing about it! That’s too bad, I think he is great on the show!” We agreed both were awesome together and we will never forget the fun storyline the actors brought from California to Llanview!

Though Kerry hasn’t let a minute slip by since leaving the show, Broadway appearances and Tony Award nominations aren’t all she’s been wrapped up in! We were so excited to hear about Kerry’s new CD "Faith, Trust & Pixie Dust." Already, her voice is music to our ears in Xanadu, but we couldn’t help asking why Kerry chose to take the 'Disney' route for her first CD? “I am obsessed with everything Disney. You know those dorky people who walk around the parks trading pins? I am one of those dorks,” Kerry admitted. “But for me it's not about the rides, it’s really about the message. So I tried to do a different spin on some classics, and then Alan Menken gave me some songs that have never been released. So that was really cool. I wasn't initially going to do all Disney songs, but then we loved so many of them, we just decided to make that the theme.” Before Kerry’s release, she held a contest giving fans the opportunity to pick a song to be included on her CD. With so many entries, we couldn’t imagine how Kerry determined a winner. “At that point we weren't doing all Disney songs, but we got a lot of requests for Disney songs, and ended up choosing a Disney song that I didn't really know from the contest,” Kerry said. “It actually is one of my favorite songs on the CD now - God Help The Outcasts.”

Some may not know this but Kerry donates a portion of all of her CD sales to charity, so we wanted to hear a bit more surrounding her generosity... "Twenty five thousand children die every day from preventable diseases and hunger. There is so much poverty, people can't get clean drinking water, let alone the medicine they need,” Kerry explained. “I adopted my daughter from Ethiopia, and when we were there, we heard about children dying in the orphanage where my daughter was from. I have been involved with this charity called World Vision, and they are taking a percentage of the money from my CD and putting it to work in Ethiopia.”

That is awesome, Kerry! Not only is this CD a neat gift for any age, we’ll always know it’ll be helping a great cause as well! With so many fun songs on the CD, Kerry talked about her favorite, where the CD can be purchased and about her first upcoming event! “My favorite classic on the CD is "When You Wish Upon A Star." I am really happy with the way the CD turned out. We used fantastic musicians, and were able to get these famous Broadway arrangers to work on it. It's for sale on PS Classics, Amazon, Barnes and Noble and pretty much anywhere online. I'm doing a signing on May 28th at Virgin MegaStore Times Square at 5 PM and they'll also be playing tracks from the CD and from other shows I've been in.”

Soaps.com wants to thank Kerry for once again taking the time out to chat with us. While we miss you on the show, we couldn’t be happier for all of your success! We’ll continue to keep fans posted on any new upcoming CD signings and such, so stay tuned to our One Life to Live Actor Appearance page!

One Life to Life Brings Home The...

One Life to Live’s Eddie...

Dancing With the Stars Recap: Which Couple Fell Short of the Top 10?