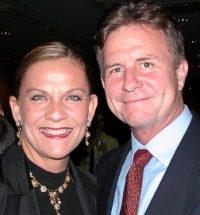 “One Life To Live” is about to make things a family affair. Soap Opera Network is reporting that Kim Zimmer’s (Echo) husband A.C. Weary will appear on Friday August 19. Keep an eye out for Theo, the main man behind the Spotted Pony, who mistakes one Llanview resident for a stripper and gives another one a hard time during his visit.

A.C. appeared on the show in 1978 and 1983 as Dick Grant, “The View On Llanview’s” producer. In 1978 he also showed up on “Ryan’s Hope” as a paramedic then went on to play Gary Shaw on “Edge Of Night.” In addition, he served as director for various episodes of “Another World.”

To find out about Kim's upcoming project visit Kim Zimmer In Sunset Boulevard.