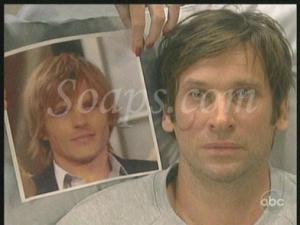 After months of waiting, fans were treated to one of the biggest reveals in Daytime. I have conflicting feelings on some of the details that brought the storyline to this point. Let’s take a look at those first then touch base on a bit of the other goings on in Llanview…

“God help me if you are both my brothers.”
Better run to St. James and pray for God’s help, Viki, because they are! The scene with Viki scolding the two guys for arguing, and how the men handled each other in the same room, really made it apparent they were brothers before the DNA results and Irene were brought in to verify. Everything leading up to the big reveal held me on the edge of my seat. Tea and Blair having a last go at it over Todd was so old school. Starr’s recollections of the man she used to know was touching, and watching both men’s responses throughout… I felt their pain. The only thing I had trouble with in the whole debacle is that Victor Jr. was a grown man when Todd was brought in for the class that would change his life: Todd 101. Irene claimed Victor Jr. started to believe, after all of the Q&As, that he was in fact Todd. Maybe this would happen with a small child but a grown man? If he was supposedly brainwashed, we should’ve been privy to more of the flashbacks as to how it all started instead of making it out to viewers that the two men simply sat next to each other for days, trading everything Todd. It all seems a little too Mitch Laurence-electroshock-crazy to me. In all fairness, the Todd we’ve known for years has lost just as much as the Todd who’s been kept away from his family. My heart breaks for everyone involved. I anticipate how they’ll manage to move forward. All and all, I’m okay with the outcome. Props to Ron for taking the storyline this way instead of turning it into another manipulative stolen identity case. I hate that we are losing Trevor St. John, and will never forgot how he pulled off making the character his own, but Roger slipped right back into the role and reclaimed my interest as though he’d never left. Were you surprised by who the real Todd turned out to be? Vote in my Poll: The Real Todd Manning Revealed to let me know.

The Spotted Pony.
I’ve suspected from almost day one that Cutter was CJ Roberts in disguise. With the revelation that he and his sister used to pull off scams before Aubrey came along, and his worry over what or who one would find at the Spotted Pony only clarifies Cutter has a deeper secret. Rama, being an old friend of Aubrey’s, would be privy to it. Maybe Cutter is worried Rex will find Sarah, someone Rex used to have a relationship with, in Kentucky. If Sarah is the sister Cutter had a falling out with, she could blow him out of the water. The only thing is… If Cutter is CJ, he comes from Buchanan money. Why not just claim it? And he did have a thing with Tess, who would be his cousin. But Sarah had a thing for Joey, so who knows. Or… If Cutter isn’t CJ, maybe he’s Kim’s brother. That would explain David being able to blackmail Kim, who possessed a huge secret, out of Llanview. These are not spoilers, just me rattling off my latest predictions.

This and that.
What a hoot it was to watch Natalie be mistaken for the newest Spotted Pony stripper. Go figure! Back in Llanview, when I wasn’t choking on Brody’s vow to keep his secret about Liam hidden, I was sitting back and sighing when Ford kissed Jessica. My forecast for the future… John kicks the crap out of Brody when he finds out what he did, and Jessica and Ford quit fighting their feelings and take a chance on love again.

Smacking down the D.A.
Mrs. Evan really let Nora have it for selfishly asking Destiny to keep the baby. In Nora's defense, after Destiny decided not to have the abortion, she voiced the same concern, giving up possibly the last tie to Matthew, which means Nora wasn't totally off base in bringing this up. Destiny was thinking about it too. In Mrs. Evans' defense, she felt Nora guilted Destiny into keeping the baby. As a mother with a son and a daughter I can see both women's point of view. One thing that ruined the scene for me was when Mrs. Evans went and threw out the racial card, accusing Nora of looking at Destiny like 'the help' if she decided to hand over her baby to be raised by her and Bo. We have enough racial issues in this world. Throwing comments like this into Llanview dialogue is totally ridiculous. This is a huge pet peeve of mine, and it irked me twice as bad when I replayed the scene to be sure the ignorant comment really did come out of Mrs. Evans' mouth.

Leaving on a jet plane.
Good riddance to Kelly and Joey, another couple who never quite got it right in Llanview. Better luck in London. I'm hoping for an emotional goodbye next week, as I had hoped for more for Kelly's return. Joey, well, never been a fan. We'll also have to say goodbye to Dorian and David next week. Not looking forward to that exit, hopefully Prospect Park will keep the internet revolving door open for their return when the show migrates online in 2012.

Barret Helms Joins The Cast Of One...