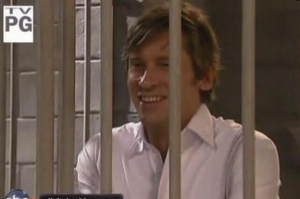 Hallucinations or back from the dead? (Soap.com)

Wow, what a week it’s been in Llanview. This week was all about getting answers and the much-anticipated reveals and reunions. The payoff was great, along with some fantastic acting. I actually found myself riveted, with not much complaining to do. Here’s what I thought…

Will the real Todd Manning please stand up?
Where do I begin? Once T.M. emerged from behind the curtain to the shocked residents of Llanview, every scene that followed had me on the edge of my seat. There were so many great scenes between T.M. and those he loved. I loved how they weaved in flashbacks of T.M. with the parties involved throughout the week. Roger Howarth was masterful in each scene, expressing joy at seeing his loved ones and anguish that he was being doubted. In fact, every player involved with this story really amazed me. I don’t know about Blair, but that kiss T.M. planted on her knocked my socks off! Tea’s confusion seemed genuine, as she wants to believe her husband but is torn. My heart almost broke when T.M. begged Viki to believe in who he was, because if she did, then everything would be okay. Best of all was Starr’s reaction. When she first saw T.M., she knew he was her father. Although confusion followed, we were rewarded with the emotional moment when T.M. learned of Hope. I had chills. On the flip side, Trevor St. John did a great job trying to simply write off T.M. as an imposter. The one thing about this story that would have been great is if viewers did not really know about Trevor’s departure. Had we not known he was leaving, it would have been more interesting to watch both T.M. and Todd plead their case. The details are still murky on how this stolen identity all went down, but I feel the viewers were treated to some very special writing and acting this week in these scenes. Which scene riveted you the most? Please vote in our poll!

Mama Said Knock You Out.
My one complaint this week involves bratty Jack Manning. I understand that he was very young when T.M. left, so it is natural that he would defend Todd as his father. However, there is something about him that makes me want to punch him every time he's on screen. Starr was genuinely trying to reach out to her brother and sort out the chaos together. When Jack nonchalantly admitted that Todd "got him out of the murder charge," it was obvious he hasn't learned anything. He got away with murder and acts like he was entitled to do so. Instead of making the most of his second chance and doing something good, he's just being a jerk.

I See Dead People.
Rex was another character that really gripped me this week. Many of us have lost someone we love and grieved greatly and can relate. Watching Rex go through the grieving process over Gigi bring tears to my eyes. He's exhausted, drained and desperately sad. Now, he's seeing visions of Gigi. While it could all be a hallucination, it could also be something divine. I'm not sure why Gigi is back, but I'm looking forward to learning what she wants to express to Rex. While she's around haunting people, maybe she should pay Jack a visit.

In other Llanview news...
Destiny finally revealed her pregnancy. Shaun made a great point when he wondered how a baby could have a baby. Next week, she'll make a decision about what to do. This storyline hasn't really been my favorite, as we recently went through a teen pregnancy with Starr and Cole. Yet, I do feel for Destiny to be in this without Matthew. Speaking of Matthew, Bo and Nora finally learned that Nate was the one who attacked him. I wonder what Bo will do to Nate. I also wonder what will happen to Matthew, when and if he gets better. I was happy that Nora didn't let Clint take the fall for Matthew. It would have been easy, considering all that Clint has done. Yet like Nora said, "You can't right one wrong with another."

That's all I have for my visit to Llanview this week. The fabulous and irreplaceable Amy will return next week. Thanks for reading my thoughts and feel free to let us know what you think by commenting below. Have a wonderful weekend!