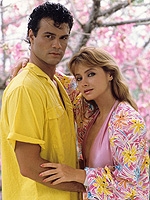 Though Andrea’s first return date was scheduled for September 26, it’s been pushed up a day to September 27. Look for her to bring along with her little Tallulah Bean Brown as David Vickers the dog.

Andrea will first appear on September 26 when she returns will her little dog David Vickers. While Tina is already experiencing a bit of bad luck, things could get worse when her dog makes a discovery of his own.

John brings his character back on September 28 to visit Clint (Jerry verDorn) and rant about Rex’s (John-Paul Lavoisier) handling of Buchanan Enterprises. It’s not long before he runs into Tina… Stay tuned!

Of their upcoming return, the actors had this to say…

“Working with John is and always has been a pleasure,” said Evans. “Our characters of Tina and Cord have always had an easy chemistry, and I am delighted that we will be able to bring them both to Llanview once again!”

“Working with Andrea was one of the high points of my acting career,” said Loprieno. “Her work ethic, wonderful talent and incredible sense of humor were always appreciated on the set and in rehearsal. When I think of all the times I had fun on the set or interacting with people backstage, Andrea figures prominently in those memories.”

Soap Opera Digest is reporting that longtime Llanview vets John Loprieno (Cord) and Andrea Evans (Tina) will make a return to the show in September. Fans were excited when the duo returned for the One Life To Live 40th Anniversary special and hoped to see them again before the show left ABC in January 2012.

The actors have always been known for their on screen chemistry and were labeled one of Llanview’s hottest super-couples of all-time. John has played Cord on and off from 1988 to 2008, where as Andrea has played Tina off and on from 1978 to 2008. Andrea, who currently plays Tawny on “The Bold And The Beautiful,” will continue in her CBS gig after this brief hiatus.

Find out who else is returning, and leaving, through our One Life To Live Comings and Goings.