Chewing on the truth.
You have got to be kidding me. Nora finds an unrecognizable gum wrapper stuffed in a couch cushion at the loft and thinks it's enough to lead them to the person who hurt Matthew? Granted, Nate was seen chewing gum, and we know he punched Matthew, but this is a bit far-fetched. For all she knows half the kids, and adults in Llanview chew gum. Not to mention that couch has been in the loft forever, and we all know Nora isn't too fond of doing household chores, including cleaning. The wrapper could've been from when Patrick Thornhart lived there years ago. Way to go, Madame D.A. Nora should've been a detective. If she can put these pieces together and make a solid case against Nate, I'll eat crow. Hell, she's let murderers go with more evidence against them.

Porn's not a dirty little word anymore.
Then there's Nate and Deanna… These two just need to do the porno already and be done with this wasted storyline. Nate should just come clean. Sure, his punch landed Matthew into his current condition. I get that he's scared, but he never meant to hurt Matthew like this. Kids and adults get into fights every day. If we're to learn something from this we all now know how easily things can change on a dime due to one's actions. Enough, we get the point. Let's move on. If this storyline continues to take up airtime, as well as some of the other kiddie ones, I'm afraid I'm not going to have much to say come next Friday.

Origami Cogs.
Rex reached a new low when he kicked Bo out of the Buchanan Mansion. Though he gets an A for effort in creating this subsidiary of Buchanan Enterprises in the name of revenge, Rex is heading down a dangerous road. Rex most likely doesn't have what it takes to go up against Todd, who's the master at this type of revenge plot. For his sake, Rex better hope he stays hidden behind the anagram in memory of Gigi Morasco. If he doesn't, it's doubtful he'll come out, or remain, on top, not to mention with his sanity intact. Running a nightclub and trying to take down a major crooked businessman are two very different tasks. Speaking of crooked…

Brody, the crooked cop.
He stooped to a new low by tampering with evidence. It was bad enough Natalie took a punch to the face over this loser, and her intent to raise Liam with him, but now she'll have to count on her buried memory of Marty's confession instead of rehearing it for herself. Unless Brody was stupid enough to keep the original tape instead of simply erasing its contents like we were led to believe… On a side note, find out what Bree Williamson said in regards to Jessica punching Natalie. 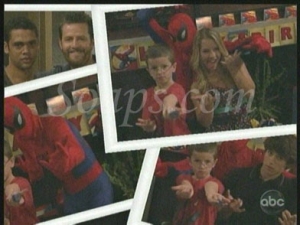 This week was all about dead bodies, missing evidence, revenge and my favorite part, Sam’s birthday party. If those attending only saw the face of the man behind the superhero costume it would’ve been a birthday to remember. Could it be T.M. is really everyone’s superhero in disguise? Let’s take a look…

Happy Birthday, Deputy Sam.
I can’t say it enough, especially because I’m not a fan of using the youngsters in major storylines… I love how they’ve brought Sam to the forefront in the one surrounding T.M. Listening to T.M. taunt Agent Baker while lurking around Llanfair and watching how he reacted to hurting Jack at The Sun only added an extra spark to his otherwise already intriguing persona. Is he the real Todd or just a programmed version of him? T.M. sure as hell is acting like the Todd of old. Providing the entertainment at Sam’s party, disguised as a super hero and interacting with those around him was a hoot. Next week… the two Todd’s finally come face to face. It’s going to be explosive. Place your bets now fans, Vegas may pay out big when the real Todd Manning is finally revealed!

A total lost cause?
Starr confiding in Baz about Sam’s ‘imaginary’ friend and the connection to her father’s old face was beyond annoying. Wouldn’t she logically confide in James since it’s been bothering her so much? That’s the sort of thing you do, lean on your significant other during stressful times. I no longer care about Starr or James as a couple and couldn’t care less if they make a real go of their relationship. Ron Carlivati hyped this couple up then threw them on the backburner for far too long. If I knew this was going to happen, I would’ve rather watched Starr wait around for Cole for ten years. At this point, how do you feel about Starr and James? Let me know through my Poll: Starr and James.

Z100 Radio's Elvis Duran And The Morning Show's Carolina Bermudez To Appear On One Life To Live. (Updated.) 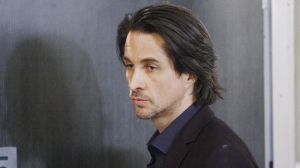