Rex's road to revenge.
I had hoped that Rex wouldn't be taken down this road, but with Gigi gone there's really nothing left for the character. I don't want Rex to pass his actions onto Shane. It's not good for Shane's mental recovery and would make Rex just as bad as Todd, who has used his children numerous times over the years in this particular area. Rex plans to use Tea and Blair to get to Todd and Jack. It's out of character for Rex to hurt two innocent women, unless he's being written as the Rex of old. If he has any luck, Rex will run into T.M. and use him to make the Manning clan go crazy with little effort or Buchanan funds. I can't leave this subject without acknowledging that Jack appears to finally, sincerely feel the guilt and regret of what his actions have caused. Todd is doing his son a disservice by not allowing him to express his true remorse. Jack may have escaped jail time but what he contributed to will eat away at him for the rest of his life.

The little things I could care less about.
We have another pregnant teen in Llanview. Do I care about this storyline? Not in the least. I don't care what becomes of Nate, Deanna or their blackmailer, Rick. Echo and her plot to ruin David and Dorian by throwing this Ionia chick in the middle is wasted airtime. The James/Starr/Baz triangle… The biggest bore of them all. 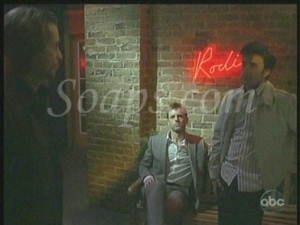 We only had four episodes in Llanview this week. I wouldn’t call it an overly exciting week, storyline-wise, but couldn’t be happier with the news that One Life To Live And Llanview Will Live On after its ABC cancellation! It’ll be interesting to see how Ron Carlivati handles all of the storylines before the big transition and what actors will carry on with the new venture. Stay tuned, as we’ll bring readers answers to various questions in regards to the switch. For now, I’m just happy we don’t have to say goodbye to a show we love. Okay, on with my blog…

Selfishness at its best.
Brody knows how much it hurt Natalie to lose John during Liam’s paternity scandal. I get that he’s upset, considering this is the third child who will be stripped away from him since his arrival in Llanview. None of the boys, Shane, Ryder or Liam, had any blood relation to Brody. It’s enough to cause anyone a world of heartache. Brody landed in St. Ann’s after Shane was revealed to be Rex’s. He knows the ramifications of falling prey to lies, yet he’s choosing to keep this secret from Natalie and John. Brody’s a total hypocrite for trashing Jessica’s way of handling her own issues. No matter the loss, he should’ve come clean the second he learned John was Liam’s father. How do you think Brody should’ve handled the truth? Vote in my Poll: Brody’s Knowledge Of Liam to let me know. Frankly, Brody’s just as bad as Marty. She created this mess. He’s keeping it hidden.

Seven-figure job at The Sun.
Speaking of hypocrites… Vimal bashed Rama for lying about the pregnancy in exchange for striking it rich. Now he’s staying quiet about John being Liam’s father. Whether he’s doing so out of fear, for money, or a new job at The Sun, it all boils down to deceit. Maybe he should reunite with Rama. They seem to have the same priorities in life. If we’re to look at the other side of the coin… I can see Vimal fearing for his life after Todd threatened to have his tongue cut out and buried along with the rest of his body. He could always go to John, who would most likely protect him. But with Todd offering Vimal a seven figure job at The Sun… That brings blackmail to a whole other level. Holy hell, I can’t guarantee I’d even be able to pass up that offer… living in the fictional land of Llanview, that is.

The gag order has been lifted.
I gained a bit of newfound respect for Jessica this week. Not for forgiving Ford for taking advantage of her, but for agreeing to allow her son’s father to be a part of his life. It was the right thing to do for Ryder’s sake. Dealing with Tess’ mistakes and everything that caused Jessica’s breakdown will only make her stronger in the end. Family or not, I don’t care if Jessica and Natalie ever bury the hatchet. My ultimate wish for Jessica would be to continue possessing and displaying that little hint of Tess with a sense of right and wrong about her. 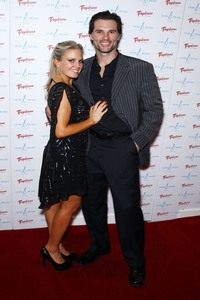 One Life To Live Saturday Teaser Poll: Another Attack