Erin Torpey Returns To One Life To Live. (Updated.) 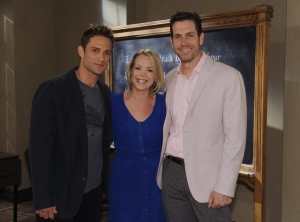 Here’s your first look at Erin in the studios with co-star David Fumero (Cris) and Executive Producer Frank Valentini. Look for Erin to make her Llanview return on September 8 – but not as Jessica.

Actress Erin Torpey, who played Jessica from 1990 to 2003, will be returning to “One Life To Live” before the show goes dark in January 2012. TV Guide is reporting that though Erin won’t return as Jessica, currently played by Bree Williamson, fans can expect the actress to appear in a fun and special way alongside one of her former castmates.

“I grew up on ‘OLTL’ and I am happy to make one last cameo as the show prepares to end its run,” said Torpey. “‘OLTL’ was a second family to me, and it will always hold a very special place in my life.”

Erin will be in the ABC studio this Wednesday taping scenes set to air sometime in September.

For more scheduled returns please visit our One Life To Live Comings And Goings.

One Life To Live And Llanview Live...