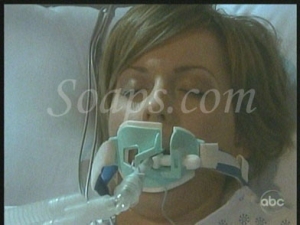 If you watched Sunday’s 38th Annual Daytime Emmy Awards you’re aware that “One Life To Live” didn’t bring home any wins, not even any technical ones. I continue to shake my head as I type this and can’t fathom how this happened, considering how amazing the clips were that Bree (Jessica) and Brian (ex-Charlie) submitted. Let’s hope the show is nominated and able to take home some awards in 2012, which will be the last Emmy ceremony it’ll be eligible to take part in. And did I mention that we heard a rumor that ABC Refused Offers To Buy AMC and OLTL? Okay, on with my blog…

Gimme that heart!
I get that Clint is dying and needs a transplant ASAP, but I cannot believe how he’s insensitively demanding that Rex turn over Gigi’s heart. Sure, she is a heart donor and wouldn’t want to live like this, but what about Rex? Is it so hard to believe that he can’t let go and doesn’t want to say goodbye to the woman he loves, brain-dead or not, in order to save the father he hates? Or better yet, who hates him. In good conscience, if Clint was any kind of a man, he would buck up, accept his son, and fate, and refuse to take Gigi’s heart. It’s the least he can do for the way he’s acted toward Rex. I’d give up my life for my children, and Clint has no right at all to use Gigi to save himself. Life or death… Where the hell does this man get off?

The latest Manning in cuffs.
One thing I’ve always enjoyed watching is Todd in father mode. He went a bit overboard but clearly hates seeing Jack following in his footsteps. Since this storyline was created for public awareness, Ron Carlivati needs to have Jack prosecuted to the fullest extent of the law. Kids need to know how important it is to make the right choices and how quickly the wrong ones can ruin lives, including their own. You’d think Jack would’ve stopped the bullying after Shane almost killed himself over it.

A wife and son.
On top of his secret connection to Todd, and everything surrounding his own secrets, Tomas doesn’t just have an estranged wife but a son. This revelation adds to the mystery surrounding Tomas, and if I wasn’t constantly reminded that we’re running out of time in Llanview, I would savor in the unknown. Unless these two new key points have something to do with what Tomas knows about Todd or T.M., there’s no need to introduce new characters at this point. Do you find this new storyline surrounding Tomas, Yvette and Baz necessary? Share your thoughts by voting in my Poll: Tomas’ Secret Life. Watching James become jealous of Baz, yet another guy in Starr’s life, is tiring. Ron Carlivati really dropped the ball on the Jarr relationship. Pumping fans up for another young love story then dragging it on with a zillion more obstacles to overcome along the way doesn’t jive well. I’ve lost interest.

Are you a bad man?
Love the interaction between T.M. and Sam. T.M.'s protectiveness proves he has paternal instincts but so do a lot of people without kids. I'm still in the dark on this one and loving it. If the big bang we've been promised at the end involves T.M., Todd and everyone surrounding their lives, I'm okay with waiting this storyline out and savoring every bit of it.

"I refuse to trade in one sleazebag for another."
Upon her return, Jessica appears to possess a bit more of Tess in her attitude. She's pushing Ford away but clearly remembers Tess kissing him. I had a feeling months ago that Ron Carlivati would go here. Come on, say it with me, "Repetition much?" Tess fell for Nash, who made Jess fall for him after losing Tess. I'd bet the Buchanan fortune that this is going to happen yet again with Jessica and Ford. If I had my way I'd have kept Tess around for good. I liked her and Ford together. They worked. Putting Jessica and Ford together will only shadow the love story of a lifetime that she had with Nash.

"Get your stuff and get the hell out."
Good riddance Aubrey. I wish she'd take Brody with her and leave Llanview already. Both are getting on my nerves and serve no further purpose. Before Brody leaves he might want to react to Gigi's condition. I can't believe he hasn't yet, considering their past.

If you missed it, read what Melissa Archer (Natalie) told Soaps.com on the Emmy red carpet through our 38th Annual Daytime Emmy Red Carpet Interviews, as well as what Tuc Watkins (David) and Brian Kerwin (ex-Charlie) had to say in Part 5 of the Emmy red carpet interviews.