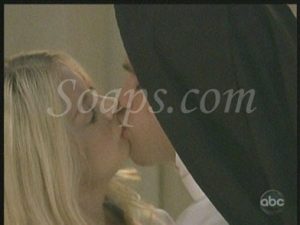 Just when I thought I couldn’t handle anymore tragedy, more ensued, which only reminds me the end is near. T.M. had a few flashbacks that made me go, “Hmmm.” Tess and Ford made love – finally, and John and Natalie kissed, only to say goodbye to their relationship forever. Let’s take a look at what stood out for me in Llanview this week…

Can they beat the odds?
Bobby Ford dressed as a nun, Sister Roberta Ford, had me in stitches. Oh, the lengths men go to for the women they love… Tess and Ford gave into their feelings and sealed the deal by making love. Some think he once again took advantage of Jessica. I beg to differ. That may have been the case the first time around, when Ryder was conceived, but now Tess opened up to Ford on a whole new level. These two are in love, and we have to remember Tess is a part of Jessica, one that may bring more impact to Jessica’s life now that she’s returned and has been faced with more deception from those she loves. Vote in my Poll: Next For Jessica to let me know where you’d like to see her go from here.

Forgive but never forget.
It pains me to know that Liam is John’s, yet Natalie and John have no idea. What a mess of a week it was with John, Natalie, Brody and Jessica, not to mention Todd’s latest taunting, which I’m so sick of. Come on Ron Carlivati, enough with the filler scenes. Jolie fans were pulled into John and Natalie’s passionate kiss just to have them admit they were finally over. This constant push and pull between them is getting old. Then there’s Brody… He’s given up on Jessica, too easily out of character, and set his sights on Natalie. I don’t get why Ron has destroyed yet another once strong, much-loved character. And why the hell is Natalie fawning all over Brody? I was praying the Llanview Gods would keep Natalie’s obscene moaning to a minimal this time around with Brody. No such luck. I’ll never forget the first time they had sex due to her hideous sound effects and could’ve done without them this time too. She never acted out this way with John. Must be Brody knows how to do something he doesn’t.

Todd's Scar blooper.
Little Sam finally got some screen time in a storyline that is promised to rock Llanview to the core. Loved seeing the old flashback photos of Todd and Starr and, along with Llanview fan Clara, found a mistake that the show's make-up department made years ago. In the second flashback Todd's scar was on the left side. Todd's scar has always been on the right side - even back in the day. But back then, someone made the mistake of placing it on the left side during that last scene that they flashbacked to on Tuesday, pictured at the top verses the one pictured at the bottom of the current and correct scar placement. Good thing it was a mistake of the past and not something that they decided to change up upon Roger's return. These flashbacks still don't shed any light on who the real Todd Manning is. Are these real resurfacing memories for T.M. or simply images from photos that have been brainwashed into his head, along with the words, "I have a daughter, her name is Starr?"

The fallout from trying to right a wrong.
I don't blame Gigi for wanting to face Shane's bullies head-on. I might have done the same thing. Jack should've gone with his gut when he started to have second thoughts instead of listening to Brad. It would've been the perfect time to show that Jack's finally realized how wrong he's been in all of this. Thank God for Rex's P.I. skills. He found Gigi alive, but now we have yet another Llanview resident deemed brain dead, one that's a possible donor for Clint. Considering Farah Fath is leaving the show this can only mean more heartache for Rex, Shane and everyone who loved Gigi.

Pregnancy storyline on the horizon?
I sure as hell hope not. The show already did a huge public awareness storyline surrounding Starr and Cole that went on for years. There's no need to have Destiny become pregnant and frankly, there was no need for her and Matthew to have had sex, which didn't even air. If Matthew hadn't fallen into a coma, I could see the kids struggling with their decision to sleep together and even the possibility of a pregnancy as a result. Even though Matthew opened his eyes, we don't have time to bother with another pregnancy storyline. For the next seven months, I want to see storylines that are going to go down in soap opera history, along with the show that we've been forced to let go of.

Find out if we'll be seeing Dr. Greg Evans before the show goes dark by reading our Interview: Terrell Tilford Talks One Life To Live Cancellation And Possible Return.