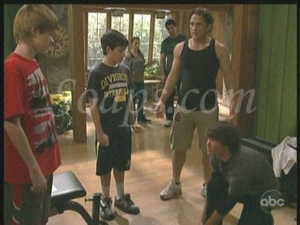 The new man of the house. (Soaps.com)

Cris and Rama’s kiss left a bad taste in my mouth. Bo and Nora were faced with a tough decision, one no parent should ever have to face. Viki took drastic measures to save her own daughter, and Shane gave Jack what was coming to him. Let’s take a look…

Bring it!
Finally, Shane stood his ground and gave Jack Manning a taste of his own medicine. He even got Brad to laugh at his best friend, Jack, who shed a few tears in pain. Like Gigi stated, violence is never the answer, but she’s about to see just how far Jack and his friends are willing to go to inflict pain on Shane. What I can’t fathom is how cruel kids can be. Could it be Jack inherited some deeper trait from Todd than any of us can imagine? They both exhibit the ability to hide who they really are while displaying behavior to appear normal, charismatic and charming when it suits them. Blair might have been right on the money when she called her own son a psychopath, not to be confused with a sociopath who is more apt to appear nervous, is less organized and easily agitated. In any case, nothing good can come from this – this spells disaster. Though I initially suspected that Gigi could turn out to be a victim, and in turn a donor match for Clint, I’m starting to think Shane or Jack will be the ultimate victim as a result of this madness.

A nut job and a menace to society no more?
Wow, if that was the sendoff the show planned for Marty, what a shame. Even though I’m not a fan of the character, if Monday was Marty’s last appearance, I found it very dull in comparison to the havoc she’s wreaked over the past few months. Why not have her go out with a bang instead of sending her off with a character we’ve longed to have return, only to not see Patrick at all.

Reunited.
I get that Natalie and Brody were having a moment during their reunion with Liam; however, I can’t tell you how happy I am that they’ve decided that anything more than friendship between them would be too difficult. I don’t see any chemistry between them at all. With that said, don’t be surprised if they fall back into rebound mode in the coming weeks. It seems to be their M.O., but in the end when the truth about Liam’s paternity comes out, I’m hoping John and Natalie will finally get their happy ending. Too bad Roxy, who’s as curious and nosey as they come, didn’t take the time to play that recorder she found in Angels Square. It’s out of character that she kept getting sidetracked and allowed others to halt the mystery of her treasure. I did get a chuckle out of her thinking there was music on the tape. Seriously, does anyone even listen to tapes anymore?

Sappy, sloppy kiss.
I've been anticipating a hookup between Rama and Cris since their first scenes together and was highly disappointed with their first kiss. The kiss was so sloppy I'm surprised those behind the scenes let it go to tape without a reshoot. Rama about devoured Cris' face! Not sure I view these two as that non-sexy couple I did a week ago. Seeing how Vimal and Rama's marriage was arranged, even though she does clearly care about him, this probably won't be the last we see of Cris and Rama. Let's hope a little practice unveils that steaminess I initially thought they possessed. Cutter, on the other hand, couldn't have looked hotter in those short-shorts as he teased 'The Vimalator' about his wife's late-night belly dancing while he was in prison.

Filled with guilt.
Thinking Nate caused Matthew's condition is clearly eating away at him. Even though Nate and Matthew were far from friends, Nate would've handled killing his own father better than knowing he's responsible for Bo and Nora's decision to donate Matthew's heart or allow machines to keep Matthew alive in some special care facility. Do you think Nate should come forward and admit what he did, if not for anything else than to ease his guilty conscience? Share your thoughts by voting in my Poll: Nate's Guilt. On a side note, I have a strong feeling things aren't really going to turn out so black and white in regards to Matthew living or dying - and I'm still not so sure Matthew really killed Eddie Ford… Stay tuned.

Matthew's heart.
After all that Clint's done, I don't blame Nora for refusing to entertain the thought of donating Matthew's heart to Clint. That would be a huge pill to swallow. Clint did the right thing by finally admitting to Joey and Natalie that he's dying. It's just too bad that once again, Jessica missed out on big family news while locked away deep inside her own mind. At least her subconscious, Tess, admitted her feelings for Ford before the electro-convulsive therapy was administered. After all, if Jessica does return she could remember Tess' feelings for Ford when she's faced with the unpleasant reminders of what caused her to regress in the first place.